Why have I been absolutely saturating you with this barrage of tiaras, diadems* and parures? Well, that’s because half this blog is dedicated to the GLORY of jewellery and those most unattainable! Crown jewels or those loaner pieces Bulgari just hands out at Oscar season: how do we get out hands on that princess jewellery!  Ah…incorrect…for there are so many crown jewels that are reserved only for the ruling monarch or (barring that!) the Queen Consort.

Where did I come up with this? Aside from the fact that I’m distracted by all that glitters…well, I guess that’s the main point. Where’s my tiara collection? Most of these royal families have more than one tiara, crown etc. For example take the Greek Royal family at the gala at Christiansborg Palace. Ex-King Constantine (center), their “actress-daughter” Princess Theodora (right) and Queen Anne-Marie of Greece (left).

Now I’m not trying to be a bitch, but why is only the king required to refer to himself as an ex? Anne-Marie is not the ex-Queen…Theodora isn’t referred to as the “Would-be Princess” as she was born in 1983 and the monarchy was abolished decades before. THIS IS A REAL QUESTION. Can anybody answer this?

Naturally the evening couldn’t be complete if we didn’t acknowledge the re-appearance of what is considered “the Greek royals’ grandest tiara” atop the head of Crown Princess Marie Chantal. This tiara which appears large enough to hold back a siege by the Mongols, hasn’t been seen publicly in decades. 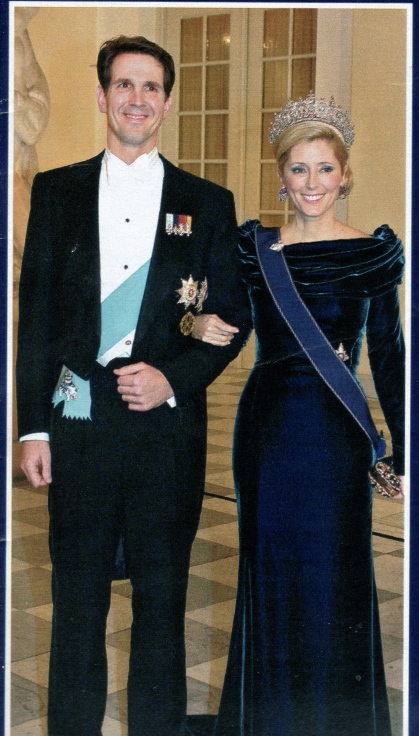 Pictured here to the right we see the ex-King and Queen’s son, Crown Prince Pavlos along with his wife, the incredibly diminutive Crown Princess Marie Chantal. I was frankly in shock she didn’t suffer severe cervical trauma or rupture a disc in her vertebrae from balancing that around. (You know? I take that back. CP Pavlos could just be really tall.)

The tiara was a favorite of Queen Frederica and I recall having seen it haloing the regal posture of Doña Sofía, Queen of Spain and former Greek princess.

But again the question arises: How can Pavlos style himself Crown Prince if there’s no throne awaiting him?

Somebody please help me out here!

*Just in case anyone was wondering the difference between a diadem and a tiara is as follows:

A diadem is worn across the forehead, unlike a tiara, which usually rests on the front of the hair.

Connecticut-based jewelry monger, history buff, Mets fan. On the hum-drum side, call me a lauded poet, novelist and ghost-writer. (That's right, I haunt prose.)
View all posts by ♔ la dauphiine ♔ →
This entry was posted in court and social, other glittery events and tagged European royalty. Bookmark the permalink.