The other day on somebody asked me what my favorite tiara is. Naturally there can’t be just one unless it was a pick-a-tiara-now-vanish-this-never-happened-gun-to-the-temple situation. (The bell-curve on that situation is trenchant.)

I did immediately mull over the LeuchtenbergSapphire Parure for my unwavering top five though. 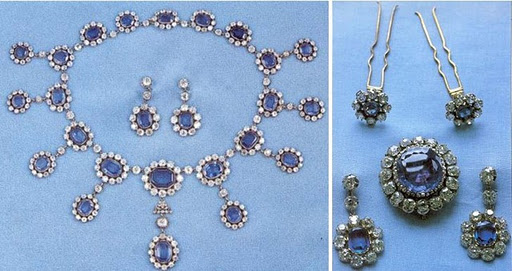 yes! jewelled hairpins! how do we live without them?

Probably the top three; thus the abundance of pictures. Currently in the Swedish Royal Family‘s foundation, this set—featuring tiara, necklace, earrings, and, yes, hairpins—is an azure halo reserved for the Queen of Sweden‘s “acting first lady.” (Apparently, King Carl Gustav’s sister wore the tiara at his pre-wedding ball before Silvia was actually queen. Conflicting info suggested Princess Birgitta was wearing the Napoleonic Amethyst Tiara in 1976, but it was still a necklace then.)

The Duke and Duchess of Leuchtenberg passed the sapphires (and many other jewels) on to their daughter, Joséphine. When Augusta’s daughter married King Oscar I, she became Queen Consort of Sweden and Norway, the jewels joining the royal house with her.

The tiara is composed of 11 sapphires framed in diamonds on a while twisting diamond vines of honeysuckle blossoms and leaves entwine to form the base. If you notice the various pictures of Queen Silvia, you can tell the crown itself is quite flexible, the way it shapes to her head is sometimes differs. Originally, there was a set of large pearls that could be swapped out for the sapphires. These are no longer in the family’s possession but the ability to attach pearls is supposedly still there. I can’t imagine the pearl version being an improvement. I feel like every royal house has a pearl tiara but a there isn’t one like the Leuchtenberg tiara in sapphire. 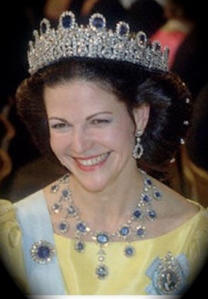 The parure is credited to the Parisian jeweler Marie-Etienne Nitot. Interestingly enough, Ninot worked as an apprentice to Auber, Marie Antoinette’s official jeweler, survived the French Revolution and became the official jeweler to Napoleon.

From the photo-overkill, We can tell Queen Silvia loves the Leuchtenberg Sapphires almost as much as I’d like to own them…or wear them once.

This is one of my favorite looks, as the Queen of Sweden channels Frida Kahlo’s greatest updos. Risqué with outstanding success!