The Delhi Durbar Parure part I

Posted on Tuesday, 28, August, 2012 1:43 pm by ♔ la dauphiine ♔
King George V and Queen Mary after the Imperial Coronation of India at the 1911 Delhi Durbar…see? It’s not just a name for a bunch of gems.

Now I’m fairly certain you can all recall two weeks ago when we had our notorious theme week Attack of the Brooches (and then fell short on day 7. What? The Lord gets to rest & I don’t?)Two days were devoted to brooches that made up the Durbar Delhi Parure or at one time made up the stomacher.  The fact of the matter is that there are six pieces that make up the Durbar Delhi Parure:

We are already familiar with the Cambridge Emerald Earrings (Seen pictured in the Grand Duchess Vladimir Tiara post, with which they are often paired.)
I’ also certain the below left brooch looks familiar, unlike its emerald sisters in Attack of the Brooches Week, this one did not come from dismantling the stomacher, rather it was one of three gifts given to Queen Mare in honor of her being crowned Empress of India. The Delhi Durbar Brooch was presented to Queen Mary by the Maharani of Patiala on behalf of all the woman of India. One can see the rose finely-carved in the the hexagonal stone, the reverse side apparently sports a “foliage design”. 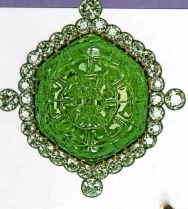 It wasn’t sufficient to simply surround the emerald diamonds, each corner needed to be accentuated with four additional diamonds, as if they were marking the directions on a compass.
Queen Mary wore the Durbar Delhi Parure and stomacher when she and King George V were crowned Emperor and Empress of India in 1911. (The capital of India was also moved from Calcutta to Delhi on that December day.)

To the left, we see a brooch originally used as separate and detachable parts of a stomacher made for the Duchess of Teck in the early 1890s, Queen Mary joined the two elements (joining two of the famed Cambridge Emeralds) into a brooch which she wore pinned below the Delhi Dunbar Stomacher. Although it should NOT be confused with the brooch pictured below, which is so TOTALLY distinct as it was made from two Cambridge Emeralds and was also incorporated into the Delhi Dunbar Stomacher.

All sarcasm aside, the brooch on the right was regarded as the centerpiece of the stomacher that originally belonged to the Duchess of Teck, who eventually passed it along to her daughter, future Queen Mary. Both mother and daughter loved this triangular ornament.

A stomacher is technically a decorated triangular panel that fills in the front opening of a woman’s gown or bodice or (in our case) it’s a piece of jewellery made to adorn said part of the lady’s bodice. As we all know, stomachers fell from fashion’s graces and the famous “verdant vee” was dismantled into at least three brooches, two of which we see here. The Delhi Durbar Stomacher was a favorite of both Queen Mary and her mother, the Duchess of Teck.

The original Cambridge Emerald Choker, designed and crafted by Garrard & Co., London had 16 emeralds and was made to pair with the Delhi Durbar Necklace and bracelet. In the 1920s, Queen Mary commissioned Garrards to remodel the choker into an Art Dèco piece, with 14 emeralds and diamonds set in platinum.

The choker flaunts four large, oval cabochon emeralds, the largest as its centerpiece with three other large cabochons of equal size and shape spaced equally apart. The smallest emeralds, seven in total, are situated between two large emeralds, making seven large and seven small emeralds symmetrically run the length of the choker. Each of the large emeralds are surrounded by (what else?) round, brilliant-cut diamonds.

This bauble, like so many other precious pieces in Elizabeth IIs collection were given as a gift to Lady Diana Spencer in honor of her marriage to the Prince of Wales. The Princess of Wales initially sported the Cambridge Emerald Choker as it was intended. 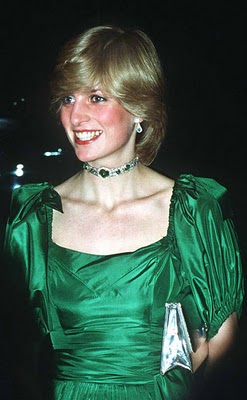 We can official dub the choker to be the part of the Delhi Durbar Cambridge Emeralds to be most victimized by the ’80s and its tackiness. We can’t blame the highest-profile princess of the decade for falling victim to fashion but that doesn’t make the following any easier to look at.

avert your gaze! This is why the 80s style-revival petrifies me.

The Princess of Wales wore it as a bandeau or more accurately a headband–check the way she’s got it Karate Kid-yanked cross her forehead. Perhaps inspired by Jane Fonda’s Jazzercize, Diana of Wales premiered her new look at a charity event in Melbourne in 1984 and again in ’88 at another Australian event.

After she and Charles divorced, Princess Diana was allowed to keep her all of the jewellery given to her by the Queen with the caveat that they could never be loaned or sold. After Diana’s death, however, the pieces were returned to her Majesty.

Along with the hexagonal Delhi Durbar Brooch, Queen Mary of England and now Empress of India, received the Delhi Durbar Necklace as tribute from the maharanis of India. This is another piece we’ve seen before; Queen Elizabeth also likes to pair this necklace with the Grand Duchess Vladimir Tiara, when it’s “emerald-mode”. (See link above for more pictures.)

Originally a detachable pendant with a pear-shaped emerald plunged from the center stone of the necklace. Later on, Queen Mary added an 11.5 carat marquise diamond, the Cullinan VI, a personal gift from Edward VII to Queen Alexandra. Now, both gems make up the pendant, each hanging unequal lengths. It was once said that nobody dripped more in jewelry than Queen Mary. This creative addition to the the pendant proves Mary of Teck knew her stuff.

When Queen Elizabeth II inherited the parure in 1953, the necklace immediately became the piece most frequently donned. Here she has paired the Delhi Durbar Necklace, the Cambridge Emerald Earrings with the Girls of England and Ireland Tiara.

Unlike the Leutchenberg Sapphires, this parure seems to hail from different points all over, making it just a bit more complicated to explain but much more fun to mix-and-match. (Especially if you’ve got a collection like Elizabeth IIs!) So just to re-cap we have hit these points on the Delhi Durbar checklist. Study the above sepia picture of Queen Mary and you will be able to spot each of the five jewellery pieces.

Cambridge Emerald Earrings won by the Duchess of Cambridge (no, not Kate Middleton!) gambling at a charity event.

The Cambridge Emerald/Delhi Durbar Stomacher, favorite of both Queen Mary and her mom the Duchess of Teck; eventually disassembled and made into about a zillion brooches.

and the three gifts from the Maharani of Patiala presented in tribute to Mary of Teck when she and King George V were crowned Empress and Emperor of India at the Delhi Durbar in 1911.

the Delhi Durbar Brooch, etched with a rose, hexagonal, multifaceted. What I call a heartfelt gift; the above, exquisite, Delhi Durbar Necklace (we’d all step over our own grandmothers to get one) and finally, the most illustrious of all the Delhi Durbar Tiara.

The lovely tiara (and representative namesake of this blog) has gone through so many incarnations (at least four) that it requires its own post, regardless of the fact that it is the integral part of the Delhi Durbar Parure.

Yeah, I know you were waiting for the tiara…I really am a wretched tease sometimes.

Do come back, won’t you?

7 Responses to The Delhi Durbar Parure part I