I wonder if I’m cheating talking about a crown for tiara time, but I felt like mixing things up a bit. Besides, I have a particular soft spot for this crown as I’m a quarter Bohemian. Besides, with gemstones so varied and brazen you’d think Harry Winston made in the late 50s for the Empress Farah? *drool*

Charles IV, hereditary King of Bohemia and Count of Luxembourg, had this crown made in 1347 for his coronation. He was also the first Bohemian Holy Roman Emperor (crowned 1365) as well as King of the Romans (1346) and King of Burgundy (1355). Charles named the crown for Saint Wenceslas, the first patron saint of Bohemia and declared it to be henceforth a state crown for the coronation of all his successors: the future Kings of Bohemia. Upon Charles’ orders the crown was to remain in St. Vitus Cathedral, within the walls of Prague Castle. It was last used to crown a Bohemian King in 1836, the coronation of Ferdinand V. 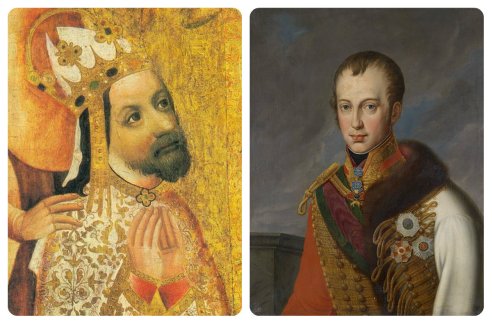 The crown was a work in progress to rival la Sagrada Familia. Charles reset and resized his crown whenever he acquired additional eye-candy. This perpetual accomodations of precious stones supposedly continued until the day he died in 1378. Given was the reason for its “unique” appearance by the Prague Castle homepage. The crown contains a total of 19 sapphires, 44 spinels, one ruby, 30 emeralds and 20 pearls. The gold from which it’s made is about 90% pure between 21–22 carats.

According to the clunky translation from the Prague Castle website, “in shape this Crown is related to the previous crown of the Premyslides and the kings of France.” I think they mean it’s modeled after those styles. You can clearly see a medieval Fleur-de-lys motif at the center. (BTW they mean Premyslid Dynasty, the word “premyslides” does not exist in English. There was no image available for a Premyslid crown.)

According to legend, the crown is the personal property of St. Wenceslas and may only be worn by a rightful Bohemian king on his coronation day. Any “usurper” (or outright moron) who places the crown on his head will die within a year. During World War II, Reinhard Heydrich, the Deputy Protector of Bohemia and Moravia, is said to have secretly “crowned” himself while inspecting St. Vitus Cathedral. He was, in fact, assassinated less than a year later by the Czech resistance.

Personally, I find it impossible to find a decent picture of the crown. I chalk this up to the fact that only a replica is on display. The actual crown (along with the rest of the Bohemian Crown Jewels) is locked in a secret chamber whose door is hidden somewhere in St. Wenceslas Chapel, the holiest nave of St. Vitus Cathedral. The honest-to-God security measures sound like their own legend. The door in St. Wenceslas Chapel is bolted with seven locks, each lock boasting a single key. Said keys are held by the President of the Czech Republic, Chair of the Chamber of Deputies of the Parliament, Chair of the Senate of the Parliament, the Prime Minister, Mayor of Prague, Archbishop of Prague and the Dean of Metropolitan Capitule in Prague. The jewels are only taken from the chamber and displayed on notable occasions approximately once a decade. The last such occasion was in April 2008.

Either way, the probability of all seven bureaucrats in the same room and having remembered to swing by the safe deposit box for their special keys beforehand would probably happen once every ten years anyhow.