Ko-Ko-Koshnik Time-Machine! the 1903 Ball at the Winter Palace

Okay, you either think the title is (1) uproarious like me–I thought of it last night, (2) cheese-tastic, or (3) you don’t know which cartoon I reference. Only a slideshow seemed appropriate to showcase the illustrious regalia of the 1903 Ball. A delightful buffet of kokoshniks, indeed!

Over the course of two days in 1903–February 11 and 13–a magnificent costume ball was held at the Winter Palace in St. Petersburg. By proclamation of Tsar Nicolas II and Tsarina Alexandra, the guests must be clad in the trappings fashionable in 17th Century Russia. 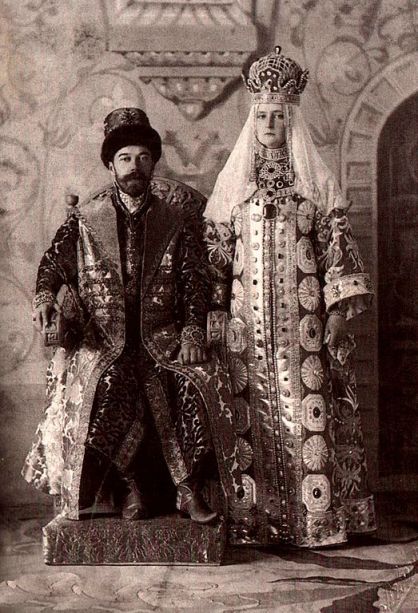 Nicky and Alix looking exotic and nostalgic in 17th century garb. Is that a real beard?

The Tsar and Tsarina dressed as Alexei I, the second Tsar from the Romanov dynasty, and Alexandra as Maria Miloslavskaya, Tsar Alexei’s first wife (of many). The entire Imperial family posed in the Hermitage’s theater for what was to be their final photograph together. 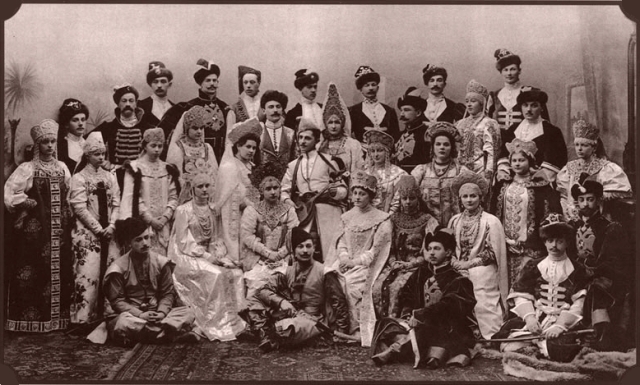 What I can’t figure out is the date…was the ball February 11th through the 13th? Was the “balling” done on the 11th and the 13th with the 12th a designated “hangover day” for sleeping it off and nibbling soda crackers? I’m sorry, now I just can’t get the image of whining royals in plush featherbeds with old-timey ice-packs on their foreheads. I wonder if they knew about ‘hair of the dog’ back then. Could you imagine the neediness? (If you can’t ask my husband what I’m like.) I sincerely hope the Help got the following week off for holiday.

Oh how the Cristal must have flowed! I wonder how many drinks were downed before those costumes became absolutely stifling. (I don’t know what the heating situation at the Winter Palace was in the early Twentieth. I can’t imagine an opulent ball given by the Imperial Romanovs being drafty. How tacky!) Many were priceless originals brought over from the Kremlin especially for the event.  Check out Grand Duchess Xenia Alexandrovna‘s richly bejewelled get-up!

Since I mentioned champagne, an interesting side note from your Blog Hostess the Champagne Whore: Cristal was invented exclusively for Tsar Alexander II in 1876. Given the political unrest at the time, he insisted his bubbly bottled in clear glass should there be a bomb inside. Louis Roederer commissioned a Flemish glass-maker to create such a bottle, with a flat bottom instead of the traditional punt. (The “punt” is that conical indent at the bottom of all wine bottles and–yes–they do vary from bottle to bottle.)

While Alexander II never received his nefarious champagne cocktail, Nicholas II was shaking his own like a paint-mixer. Grand Duke Alexander Mikhailovitch recalls the gala event as 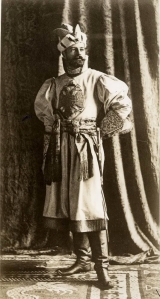 “the last spectacular ball in the history of the empire…[but] a new and hostile Russia glared through the large windows of the palace…while we danced, the workers were striking and the clouds in the Far East were hanging dangerously low.”

5 Responses to Ko-Ko-Koshnik Time-Machine! the 1903 Ball at the Winter Palace