Trivia ‘Toinette # 10: Antoinette and her sister Charlotte were “dead ringers”

Actually, Marie Antoinette and Maria Carolina are still confused for one another in various paintings. Frankly, taking a look at these two, can you blame anyone? No, it doesn’t help that the sisters appear to be wearing the same dress. Isn’t it comforting to know that even princesses share hand-me-downs? Can you tell which one is which? 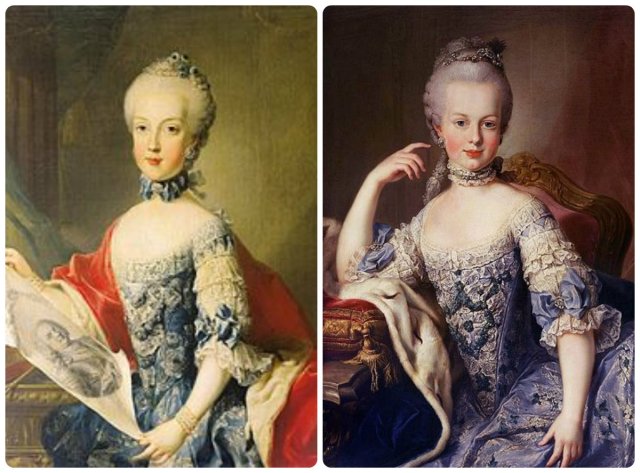 Yes, Maria Carolina, known affectionately as “Charlotte” by her family, is on the left. (How many of you got those two right?) Charlotte was only three years older than Antoinette and, like the twins they appeared to be, the two were best friends. Empress Maria Teresa actually endeavored to separate them, dilute their mischief, but to little avail.

Check out this picture, in which Maria Teresa had her two youngest daughters painted as goddesses, I’m almost 100% certain that Charlotte is on the left and Antoinette is on the right, especially considering the right-hand girl is sporting more baby fat. 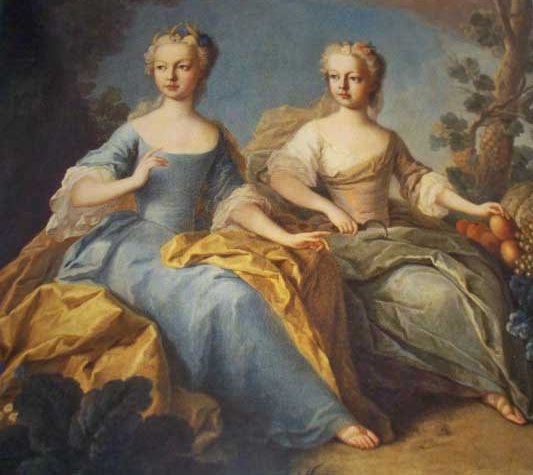 I do apologize for not citing the artist nor the year, but this is just another example of how I collected countless pictures, right-clicking like there’s no tomorrow, long before I got around to starting a blog. In fact, with the number of pictures I’ve got here in iPhoto, I’d say I was planning a blog for about three years. Whoops…

Although Antoine and Charlotte were almost identical, the general consensus was that Marie Antoinette was prettier. (According to Antonia Frasier.) So, those of you who saw yesterday’s post, did you correctly guess which of the other two pictures pertain to which future queen?

Maria Carolina aka Charlotte was born in 1752, the thirteenth child of Maria Theresa. Like so many of her siblings, her marriage was used to cement a political alliance, this one with the King of Spain, who wanted an archduchess for his son, Ferdinand IV the King of Naples and Sicily. According to Evelyne Lever, “Maria Teresa had previously wanted to separate the two adolescents to avoid [the hurt] feelings their attitude provoked…the two accomplices had continued their games. Carolina’s departure for Naples in April 1768 put an end to this close bond” (10).

Maria Carolina reportedly found a husband whose “face was very ugly and…behavior was often peculiar” (ibid). When she learned of her younger sister’s impending betrothal to the Dauphin of France, she wrote “I would like to write [to Antoinette] entire volumes on the subject…for I must say the agony suffered is all the greater in that one must always appear happy” (ibid).

King Ferdinand IV and Queen Maria Carolina of Naples had seventeen children, only six of which are pictured here.

10 Responses to Trivia ‘Toinette # 10: Antoinette and her sister Charlotte were “dead ringers”