And here we all are again…slightly wound up. Slightly rewound, unraveled. *insomnia* Wednesday. Why does day three always sit bitter on your tongue like you left the coffee in the French Press too long? Damn good thing we’re talkin’ tiaras all this theme week! Yipee! Even better, the Westminster Laurel Wreath Tiara is one that has managed to stay in the family since it was first purchased in 1906. 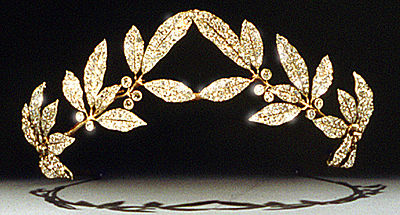 Crafted by Fabergé legend Albert Holmström during the Neo-Classical revival of the fin de siècle, Holmström crafted the two curving sprays in diamonds and engraved gold rubbed-over a silver setting, engraved and pierced to give the effect of the tiny veins that texture foliage. The dorsal side of each gold textured, silver leaf is backed in more gold. (Don’t you just wanna touch it now?)

Mr. Hollström chose myrtle leaves and [juniper?] berries to form the twin seven-and-a-half inch branches as both were sacred to Aphrodite, the Grecian goddess of love. The tiara was commissioned for the wedding of the Hugh Lupus Grosvenor, first Duke of Westminster’s sixth son (and tenth child). Lord Hugh William Grosvenor was wedded to Lady Mabel Florence Crichton, (of a very impressive lineage herself) in 1906. The real disappointment is the lack of photo/painting/daguerreotype documentation of these prestigious peers given the family’s trove of tiaras, lands and titles. Or maybe it’s the Internet’s fault! Shame on you!

What better allegory for a wedding than the Goddess of Love herself? Moreover, Fabrege used these symbols to evoke the ideal bride. Full of beauty, grace, love and virginity. (<– I’m quoting that last one. I find it funny considering Aphrodite was not one of the three Virgin Goddesses of Greek myth. Athena, Artemis, Hestia.)

The most recent incantation of the Goddess of Myrtle Leaves was Lady Tamara Grosvenor, eldest daughter of daughter of Gerald Grosvenor, the sixth Duke of Westminster.  Lady Tamara married Edward Bernard Charles van Custsem on November 6, 2004.

Huzzah! A video!, I know you love those! I’m not sure what the DP is trying to evoke with the jerk-in/jerk-out, pulsing camera thing. Just be patient, you do get to see the bride and groom, it’s worth it. Oh and apparently every paparazzo in the crowd is a Prince Harry fan…

The couple were married at Chester Cathedral in Chester…wow, a place in the UK I’ve visited besides Manchester & the Isle of Skye. When I lived there, the Marqués de Alcorcón and barely had enough scratch to buy our weekly bus pass. So no, I’ve never been to London. Damn expensive, says I! (Marqués? Dauphin? What moniker to call the husband? What fun! he’d hate them all!)

Any how troops, brace yourselves, we’re gonna vote on our favorite of the Westminster Tiara Collection when this is all said and done! What are theme weeks for anyhow?

Connecticut-based jewelry monger, history buff, Mets fan. On the hum-drum side, call me a lauded poet, novelist and ghost-writer. (That's right, I haunt prose.)
View all posts by ♔ la dauphiine ♔ →
This entry was posted in court and social and tagged Duke of Westminster, fabrege, neo classical tiara, tiara. Bookmark the permalink.