[segway! from the trés obvious lead-in from the previous post on the French hood] its cross-Channel-cousin was (oh, irony of ironies) the English hood. 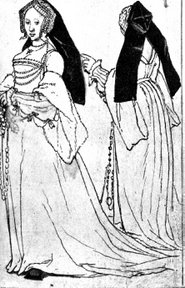 That angular contraption of birdhousy geometric sensibilities that seems to imply self-castigation or taking up vows in a strange nunnery. (Now I’m imagining trying to crack one’s neck without dislocating the shoulder from its socket.) Gable hood and English hood are often used interchangeably, but I kind of break it down into further categories.

The earliest version of the English hood can also be called Steeple hood. It was popular from the mid-1400s to the early 1500s. Much simpler and (in my opinion) more flattering than the official Gable, the Steeple hood had a simple, pointed shape. Less mutant shoebox and more Big Ben. The face was framed by decorated side panels called lappets and a veil was worn loose behind. The Steeple hood graced the heads of Henry VIIIs grandmother,  Lady Margaret Beaufort, and mother Elizabeth of York.

Interesting side note: Elizabeth of York is thought to be the inspiration for the queen’s face on the poker/French deck of cards. Neat, huh?

The later version, the ‘proper’ gable hood, was worn over several layers that completely concealed the hair. (We’ll get to the layers later on. We’ll add it to the list with snood.) Over time the gable hood became a complex construct with a box-shaped back and two tube-shaped, hanging veils. The hanging veils and lappets were pinned up in the most elaborate of ways. Check out the original incantation of the gable hood. (Mary Tudor & Catherine of Aragon, below left.) It is a gable window. It honestly reminds me of any cartoon where somebody ends up with a birdhouse on their head.

I love how it looks like both Queen Mary and Queen Catherine look like they’re banging their fists on a table for emphasis. Whomever did the pinning for Mary I certainly let the muses carry them away…yikes.

Unlike the French hood, the gable hood was was unique to England. (read: nobody in France was rockin’ one). Can you blame them? What face shape does the Gable hood flatter? Small wonder that when Anne Boleyn brought the French hood over it caught on like wildfire. The gable hood lived it’s revival while Jane Seymour was queen. One she’d died the French hood was back on the head of every English lady at court.

Technically, we can throw in a third subcategory of the English hood, dubbed a flat hood by the one website that I found to actually give it a name. The flat hood, it is claimed, is an amalgamation of the French and English/gable hoods. Does that make it a subcategory of the French hood as well? And what was it Anne of Cleves had on her head? The heck kinda hood was that? The mind reels…

Stay tuned for tomorrow’s follow up! (I know, I feel cheap for stretching this into three posts too but not that cheap.)