Tiara Time: Family Heirlooms to the Big Event! Part I: the Lannoy!

Alright, still missing my dear Otto the kitty and worried sick, but here’s the post I started this morning, hopefully it gets finished. I’m not going to edit the intro, so let’s just pretend it’s seven in the morning when I started, not thirty “LOST KITTY! REWARD!” posters later.

Welcome (me) back, kids! It was a grueling chest-cold of a week but I’m thrilled to see that a week’s absence did nothing to wane interest. (Though I’m guessing that lengthy title might have.)  And a big glittery welcome to the new follow-friends who joined the T and T crew while I was gone! Yeah, I’m taking to you, Kim Koning, thewayofthechiro, and stonebiscuit. Tiaras ahoy! Thanks for the follows!

(All followers remember, as a huge graçias for following me, I do put a link to your blog under “click for glory!” I hope it provides some traffic.)

Stat-analysis-inability aside, I couldn’t help but notice the Saturday following the Royal Nuptials in Luxembourg; my ratings went through the roof, not unlike my dad when I waltzed into the house at age 16 sporting a magnetic nose-ring. (He totally bought it! The flabbergastion was soooo worth it.) Okay, enough with my anecdote and back to what YOU want. Clearly, it must be another tiara out of the Luxembourg milieu. But first, how about a lil’ montage of the happy bride and groom?

(in purest, most irony-free voice) How can they not be the cutest royal couple you’ve ever seen? Seriously! It’s like a commercial for milk and cookies!

Let us begin by paraphrasing le Cour Gran Ducale’s rundown of the tiara in question.

For her wedding with HRH Prince Guillaume, Hereditary Grand Duke of Luxembourg, Countess Stéphanie de Lannoy wore a family tiara that her sisters and sisters-in-law alike have worn on their wedding days.

la Comtesse Stéphanie de Lannoy kept it all in the family when she chose the headgear to anchor that staggering lace!

The Lannoy tiara is packs a wallop with 270 miners-cut diamonds set in platinum. Perched in the center is a pear-shaped diamond, inverted to a lofty exclamation point. (As if one were needed. Isn’t a state wedding of a countess and a hereditary grand duke enough of a ‘!!!!’?) A dozen larger brilliants stand out owing to their closed sets, popping like tight buttons along the patterned, leafy scrolls. A thin line of platinum-gilded pearls underlines the contours of the tiara, tracing the tabulation of the stones.

For such an enormous exclamation point of a centerpiece diamond and 270 others, the tiara itself appear quite dainty and ready-for-flight (bottom left) like one of those balsa-wood gliders we used to buy at this old-timey five-and-dime on Martha’s Vineyard. Conversely, it harmonizes seamlessly with the delicate lace of her veil. (Frankly, I can’t get enough of that antique-hued encaje.) 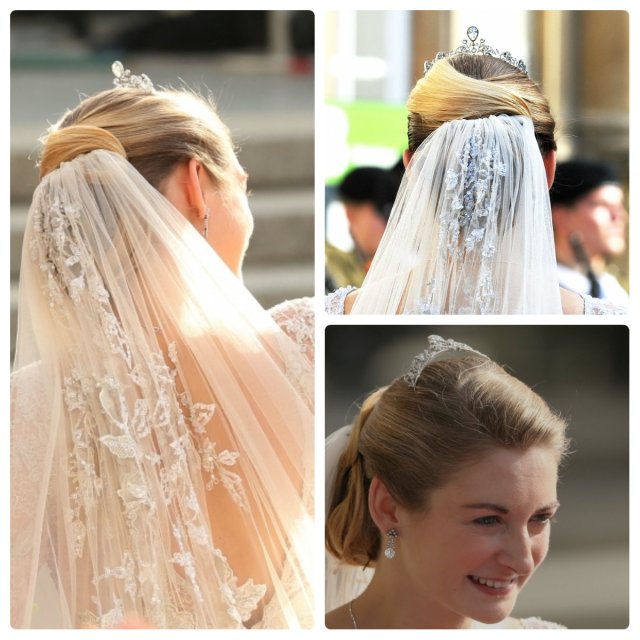 No, wait, upon closer inspection of the left-hand photo, could it be a blush chroma rather than antique? (So many grey areas! Bad pun! Get on with it and stone me! Worse pun!) But look how delicate it appears once that mid-October wind kicks up! Almost like a tiny Spanish peineta

The tiara was made by Altenloh in Brussels. Ernest Altenloh, son of a silversmith, created the company in 1878. At the beginning of the 20th century, he was joined by Robert Altenloh. (Son? Cousin? Come on Cour! Your syntax is painful and you leave some obvious holes. They have the same last name; if it’s an incredible co-incidence, please say so!)

Robert Altenloh rapidly expanded the jeweller’s reputation to international recogniton  with the quality of its jewels and the intricacy its silverwork. Their shop was originally located on the Rue de la Madeleine close to the Royal Palace (1, Place Royale – now the Magritte Museum), also sold pieces by other designers. Among its clients were the Count and Countess of Flanders (the parents of King Albert I), the Queen of Saxony and the Prince of Ligne. “Supplier* to the Court” under King Albert and Queen Elisabeth, the silversmith and jewelry shop attracted the wealthy Belgian aristocracy and well-off international clientele.

*“Supplier” to the Court is the best you could do? Supplier of what? Parsnips? You can be a silversmith and still bill yourself as a jeweller. Ask Tiffany, Cartier, heck, I think even Harry Winston does it. (Let me look that one up for you though.)

Ah, okay, yes. We misled you. Before We distinctly said “tiara out of the Luxembourg collection” and the Lannoy tiara, by definition, is not of the Luxembourg jewels at all. It belongs to Stéphanie’s family and wearing a family tiara to marry the heir to the throne simply recalls another wedding 31 years ago.

Egads! Still drawing a blank? Hint…25-foot train, the sleeves so poofy that Anne may have turned greener than the gables that became her epitaph? A famous ring that made sapphires fashionable engagement pieces again? Yes, 1981. Lady Diana and the Spencer Tiara. We haven’t done that one yet, have we?

Maybe come Thursday we’ll be having a Tiara Time Twofer. Haven’t decided yet. Then again, we haven’t done any ‘Toinette in over a week either.

Whimsey, you are mine!

13 Responses to Tiara Time: Family Heirlooms to the Big Event! Part I: the Lannoy!