Yes, it’s true. The “other” aquamarine bandeau tiara has been dubbed “the Cyclops” most likely because it was made in the 20s and it was intended to be worn low on the forehead as was the style at the time. A whopping aguamarina like that one could definitely give a “third eye” vibe to whomever had to look at it.

It’s currently owned by the the Duchess of Hälsingland aka Princess Madeleine of Sweden. King Carl Gustav and Queen Silvia gave her this simple “starter tiara” for her 18th birthday. Since then, she’s certainly worn it a lot, considering she’s got plenty of others from which to choose. For such a simple tiara it’s done much breezing about from state affair to royal wedding with big sis’ Victoria (seen below in the Six-Button tiara left and the Steel-Cut tiara right). The bandeau also seems to get incrementally further away from Madeleine’s forehead with the years.

It was first seen in the 1920s, worn by then-Crown Princess Louise (née Mountbatten). It’s been speculated that maybe the future Queen brought it with her to Sweden when she married future-King Gustav VI Adolph. 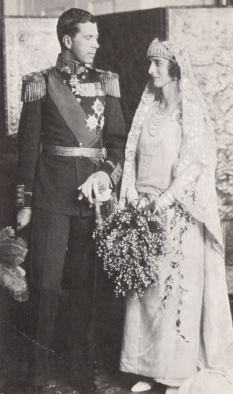 It’s not completely outlandish to believe that a Battenberg princess might posses her own tiara, now is it?

She apparently wore the Cyclops frequently in the 20s and 30s, when art deco was all the rage but taking photos of the Swedish Crown Princess wearing said bandeau was not. (Yep. Sorry, again no photo. You can make do looking at Princess Louise of Battenberg and Crown Prince Gustav Adolf’s wedding photo.)

I have a theory that aquamarines were all the rage too. The Luxembourg Aquamarine Bandeau is Art Deco as well AND Ena’s Aquamarine Tiara is from the 1920s as well. Actually, there are gads of aquamarine tiaras and parures out there. Gads. To list them is nothing short of ridiculous…and time-consuming.

Aquamarine Bandeau tiara in the 1960s. Don’t you hate it when you right-click something only to forget what it was later on? Well, exhibit Q left…which princess is this? Is it Birgitta, Desiree? It can’t be a young Crown Princess Louise, can it? I just assume it’s one of Carl Gustav’s sisters based on the placement of the tiara: just above the forehead.

Anybody know which of King Carl Gustav’s sisters this is? You have a one in four chance. It’s either Princess Margaret, Birgitta, Désirée or Christina.  A low curtsey for whomever can solve this mystery…