If you’re a fan of rubies then you have something in common with the Dutch royal family whose collection sports some cerise stones of envious caliber. For your approval, the

The Mellerio Ruby Parure was commissioned in 1889 as a gift from King Willem III to his second wife, Queen Emma in honor of her 30th birthday. This suite in rubies and diamonds was composed by the French jeweler Mellerio. (Shockingly, it’s the same Mellerio of the Mellerio Floral and Mellerio Shell tiara fame.) Mellerio originally suggested rubies or sapphires for the grand aderezo…we all know which King Willem chose. Just after the death of her husband, Queen Emma posed with this tiara, the rubies replaced with diamonds, due to the fact that she was still in mourning.

This stunning and elaborate parure consists of a tiara with open scroll-work motifs of diamonds and six ruby clusters that are connected by three strings of diamonds, an elaborate necklace (left) of three strands of diamonds set with a mesmerizing diamond and ruby lock, a matching devant de corsage (large brooch) that can be separated into smaller brooches, a three-row diamond bracelet with a ruby-and-diamond scroll motif, and (reportedly) a fan covered with pearls. Unearthing a photo of the Queen of the Netherlands wearing the entire parure on her

person is like spotting a yeti: infrequent at best and still no pearl-encrusted fan! (I’m beginning to think it was a rumor…they’re just teasing me now!) Fortunately, Queen Juliana still wore the entire ruby regalia so if We look sharp, all the pieces should be there. Supposedly, Queen Juliana rounded out the parure, adding matching earrings later on. Doesn’t it seem odd that someone would commission an extensive parure–replete with fan–but no earrings?  Heck, I think earrings are required simply to be termed a demi-parure. Isn’t that Parures 101 or something?

Either way, those radiant rubies were passed down from mother to daughter through the Orange-Nassau family. Emma gave the set to Wilhelmina in 1934 who in turn gave it to Juliana in 1962.

Sometime in the 60s or 70s Queen Juliana set up the Orange Nassau Family Foundation and the jewels became part of the collection. Thus, the Mel 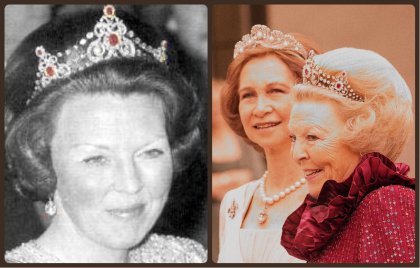 lerio Rubies are no longer privately owned, they belong to the royal house. The tiara was spotted a few times on Princess Irene’s noggin in the 70s. Overall, the Mellerino Rubies are now the privilege of the Queen Beatrix. The queen often shares these lovely piece with her daughter-in-law, Crown Princess Máxima, who most recently brought these gems back into the public eye with a flourish.

Holy cow that red-and-silver dress she paired with Emma’s jewels at the Luxembourg royal wedding in October of 2012! I need that dress! Considering this was a wedding, the Crown Princess of the Netherlands certainly toed the line between smashing and over-the-top. Well we can see who came out victorious. There’s no awards season dress that could even touch this. Brava, Máxima, brava! 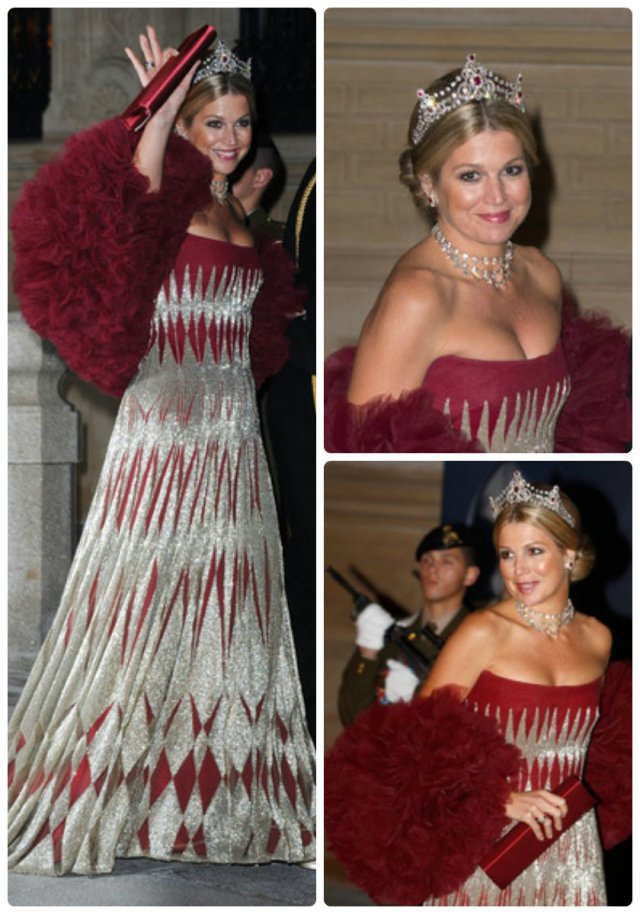 A note about your Blog Hostess:

I know We never do fashion–unless it’s m@ fashion–on this site. How to explain my gushing over this dress? With me, it’s jeans or a gala ball gown, preferably for a white-tie event. I am a biopolar dresser? I dunno. I think it explains how I love modern luxury [jeans, air travel] but will always be stuck in the past due to my love of history [princess dress, first-class upgrades on air travel.] Maybe that’s BS…middle-of-the-road dressing just ain’t up my alley. I’m much more of a jewelry and make-up girl I suppose. I wish I had more formal dress requirements. *sigh*

Anyone else like to dress up or do you find formal events a pain in the ass?