It’s our second Marie Antoinette field trip. This time we’re headed to the Getty Center in Los Angeles whose collection of late 18th century furniture recreates M@’s glory days as if you’d time-traveled back. If you’re not sleepy now, you will be. (I know, writing this post brought on both a nap and an early bedtime.)

Cerise-papered walls are decked with gold: lavish, scrolling mirror frames, meticulous clocks and candle stick sconces crafted with intricate detail. The room feels cheerful and one glance at Jean-Baptiste Tilliard’s lit à turque immediately makes you feel the size of a four year-old. Or in my case, absolutely Lilliputian. 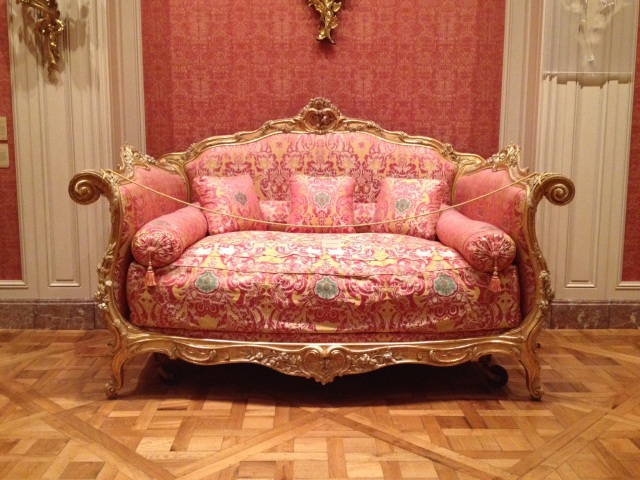 Aflood in childlike whimsey, your first impulse may very well be to sink down into its overstuffed, silken cushions or trampoline up and down for a bit. Or you may have the perfectly ‘adult’ reaction: “Where’s the ottoman?” 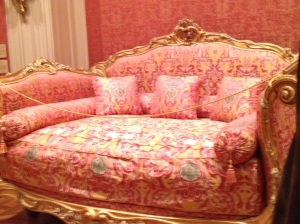 No, the lit à turque is not an armchair over-sized to the point of hyperbole, even if that’s exactly what it looks like. It’s a bed, unusually large even by today’s standards. Don’t let the name “Turkish bed” throw you. Lit à turque simply refers to a bed constructed in this style: a grandiose, more comfortable version of the daybed. More specifically, the moniker refers to this bed’s gilded, scrolling armrests, thought to be Turkish fashion. The piece itself is made of two-toned gilded beechwood and upholstered in silk.

Commissioned for “a grand private residence” around 1750-60, Tilliard’s gorgeous interior craft was made to be set sideways against a bedroom wall, fitting into an alcove. A now-missing baldachin would have draped from above. I’m imagining letting the fabric folds loose, the baldachin falling around my big armchair. Tucked away in a niche I’ve got my own fort, pretty enough for a princess! No boys allowed! Oh yeah, I need one of those.

These allowed servants to pull out the body of the bed easily, leaving the tall back attached to the wall while they made it up. (If you’ve ever tried to make a bed you’ve fun-shui-ed into a corner, you know how genius this option is.) 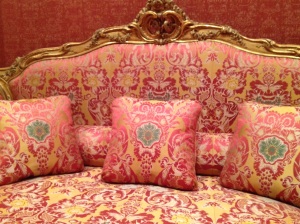 The bed does not resemble any Turkish design rather it reflects the 18th century fascination with anything foreign, especially China, Egypt and Turkey. The fashion for things “Turkish” peaked in the middle of the 1700s, when Madame de Pompadour had a bedroom that was known as the chambre à la turque (Turkish bedroom) only because the paintings displayed in the room showed a slave girl presenting a cup of tea to a sultaness. In fact, the craftsmen of the day had absolutely no intention of accurately recreating a far-away culture’s style in décor. Instead the idea was to impart a feeling of exotic opulence, even if it meant simply attaching an exotic name to a Western object. (Talk about marketing!) 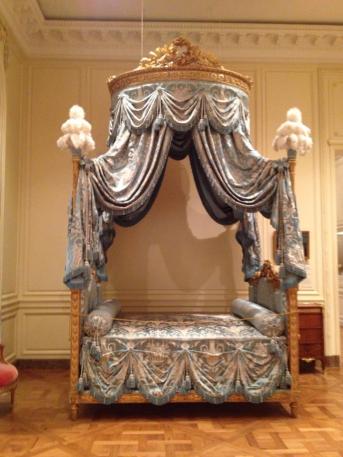 Crossing into a buttery yellow chamber, an even more imposing bed looms almost 10 feet high, cascading with grand silk passementerie and topped with ostrich feathers. This design would be dubbed “Louis Seize” in décor circles but an equally nonsensical name was obviously required. Lit à polonaise (yep Polish bed) refers to a bed constructed with uprights that support the canopy with curved iron bars hidden by curtains. (See below) Made in Paris around 1770-80, the bed frame is crafted of gilded iron, painted & gilded walnut, and silk upholstery to match the festooning canopy. 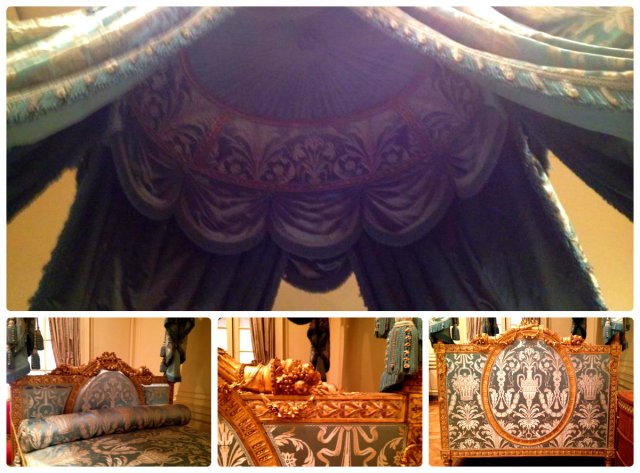 I searched around and concluded that this design is as Polish as the super-love seat is Turkish. (Vaya sorpresa.) I tend to doubt dubbing something polonaise conjured the same exotic aura as China. Wow, Poland! another part of Europe! That’s like advertizing a restaurant as “exotically Canadian” to somebody from up-state New York. Besides, wasn’t Poland part of the Prussian Empire at the time?*

Obviously, the draperies could be let down for warmth, those marble palaces sure do get chilly at night, but they also served another purpose. As we all know from the traditional Versailles morning lever and toilette that M@ hated so much, even the royal apartments provided no privacy. In the 1700s, it was typical for visitors to be received in the bedroom while the host or hostess might still be in bed. The bed was meant to be tucked away in a deep niche of the main apartments of a palace. With the curtains drawn, maybe even a dauphine of France could find a moment alone. That is until the Comtesse de Noailles and all the princesses of the blood come barging in to oust you from your slumber. Hope you’re a morning person!

* no offense to either Poland or Canada. I’m just pointing out the lack of mysterious allure these places conjure to a fellow Westerner,