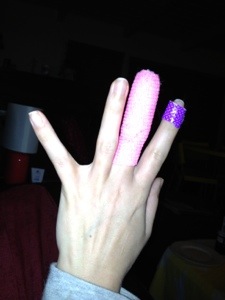 Don’t be alarmed I still have both hands I just sliced one of them when I was washing a particularly bulbous wine glass. It suddenly popped in my hand and then I had a very, very deep cut which I prefer not to remember.

Then again this is mostly to tell you that We are sorry that We have been so delinquent and so absent in my participation with all of your blogs. That doesn’t mean We love you any less. Your blog hostess is always here for you. She wants to thank Morrighan for nominating her for another award which she will get right on!

That’s right we’re coming to you via Voice Blogging thanks to Siri,  the capricious voice recognition software. She’s addicted well so we say whimsical haphazard? I’m not sure one of those will describe the random capitalization as well as strange punctuation you may notice. (Not to mention her out-right mistakes in voice-interpretation…did I accidentally set her to Canadian?)

Also you have to say all of the punctuation out loud. So, for example, you can’t say “I just got my.”  See what I mean? That should’ve been the word which is also a noun and not a “Full stop.” (I’m fixing half of these and leaving some of the other mistakes in just so you can see that new technology is perfect. Kinda reminds you of Skynet doesn’t it?)

Ah, there he is, Miles Bennet Dyson, they guy who gave his life to stop the machines from taking over in “Terminator 2.”

So, if you have Siri or any other voice recognition software, use it to post your comments and replies. And for the love of God don’t correct anything so we can all have a good laugh. Actually any story about technology not living up to how it was billed is a swell idea. If nothing else, do it to amuse an invalid-’til-Thursday! 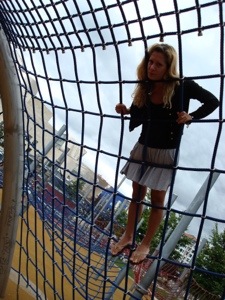 (Your blog hostess enjoying both hands in front of the Guggenheim Museum in billback.) Yeah that was supposed to read “Bilbao”.

Siri as personified on the CBS comedy “the Big Bang Theory”.