Again, this post was supposed to immediately follow the “Sweet Dreams with M@” post. Alas, We slice our hands, get distracted, you get the idea. Since it was almost finished the last time I saved it, it would be a shame not to share…

Before we press onward, let’s go back to that cherry coloured chambre where the lit à turque waits patiently for me to annex it and turn it into Fort Dauphine…Fort Blog Hostess? The name of my fort aside, the Getty Center is replete with more fun Versailles goodies that make the big armchair seem historically insignificant. 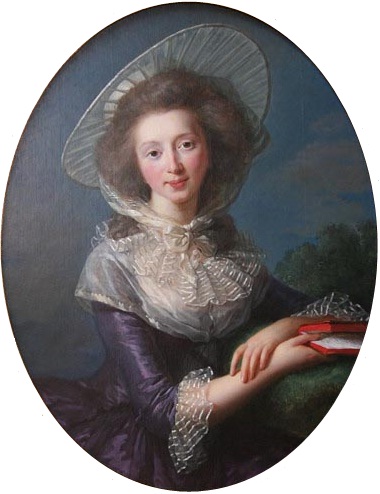 photo: Wikipedia commons as my picture came out kinda blurry

There’s nothing like an original Vigée-LeBrun gazing over you with beatific saucer eyes, is there? La Vicomtesse de Vaudreuil or–if you’re not into brevity—Victoire-Pauline de Riquet de Caraman portrait dates from 1775. The plastic wall placard asserts that the vicomtesse “is represented as a fashionable and intellectual figure.” We’ll allow you to interpret la Vicometesse’s soft, oil-paint features for yourself. (Ready? Go!)

Okay, so I see the interpretation race isn’t catching on as I’d previously conspired so let’s turn our heads right 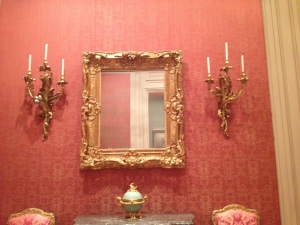 or left and dig the four wall sconces. (Pictured left and further down in the “sconce montage.”)  They originally belonged to Philipe [Ègalité] Duc de Órleans, their final owner being none other than the marvelous Marie Antoinette. The unfortunate part being the know-it-all placard nor the talkie-talkie transistor tell us how that came to transpire. What good is sequence if we don’t know the course of events, plastic tile? He’s so smug! [You must admit there’s certainly something smug about those info-tiles.]

Before we cross into the white paneled room, there’s another portrait of a familiar member of the Versailles cast. 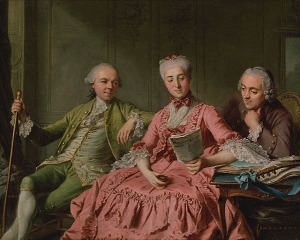 the Getty describes Choiseul as a “dedicated womanizer” who “lived large.” No wonder his wife isn’t pictured!

A portrait of le Duc de Choiseul with his mistress Madame de Brionne (center) and the Abbé Barthélemy (right). According to Getty.edu, the Abbé was “the learned curator of the king’s collection of antiquities and a close friend and adviser of the duke and his duchess.”

Now for the good stuff! So let’s head for the white paneled room, either a restoration or a replica from 18th Century France. 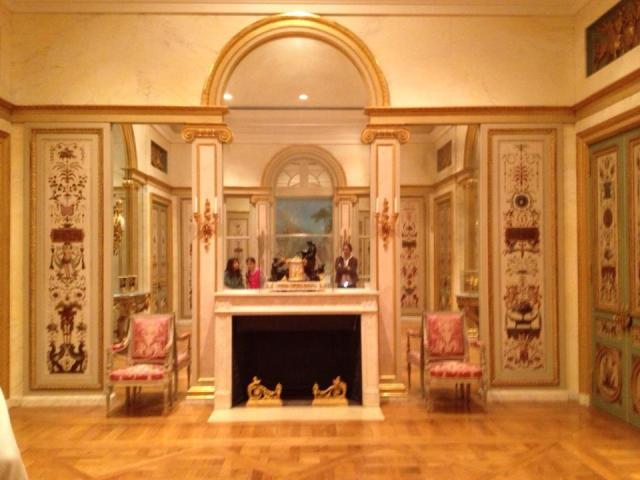 In this delightful salon, all that’s gilded belonged to Marie Antoinette. The fire dogs (bottom of the page) that sit inside the hearth are another hand-me-down. (Or “hand-me-up?” You are giving it to a queen, after all.) The real dirt here is that these were originally made for ‘Toinette’s “mortal enemy” the Comtesse du Barry! I doubt she used them or ever received them. Could you imagine M@ owning anything du Barry even looked at wrong? Neither can I. In this room we also find another set of wall sconces, this time only two-branched, hung in the Queen’s hidden closet room that she used as an afternoon retreat at Versailles. Some information, like that written on getty.edu, is worth quoting.

As with all objects made for the French queen, the set of small wall lights are of the highest quality. The chasing and gilding of this light is jewel-like in its remarkable finish, proof of the care that went into its production.

I guess that’s the difference between hand-me-ups and things made specifically for the Queen of France. Case closed!

The South Pavilion has no shortage of seating from le vrai Versailles either. In fact, they offer your choice in living room sets: blue or red. The settee is only available is red, sorry. If you’re an amie d’azure you’ll have to settle for the sidechairs.

By the 1700s two “types of chairs” had developed: chaises meublants, the more formal of the two, were designed without carving on their backs and were arranged symmetrically against the wall around the sides of a room. The red chairs and settee are examples of chaise meublants made by the famous Tilliard between 1770 and 1775.

The blue side chairs, acquired by Louis XVI himself, are examples of the “less formal” type of chair, les chaises courants were made to be moved around a room and were designed to be seen from all sides.These chairs, low and padded for comfort, are also referred to as chaises à la reine. These blue “chairs a la queen” were once part of a fifteen-piece suite of seating furniture acquired secondhand from the upholsterer Claude-François Capin for Louis XVI at the palace of Versailles. (People mock Louis XVI, but he sounds like a savvy shopper to me!)

But the chaise-de-resistance is the polar opposite of the lit à turque: one lone red-upholstered chair, dainty–almost diminutive–in size. It’s almost as great as the Court Dress by Rose Bertin. And, in the spirit of being a complete tease, you’ll have to wait ’til tomorrow’s post to bask in its glory! Of course, if you’re reading this post tomorrow, then simply click here.

Originally made for Madame du Barry, these gilded fire dogs are inspired by the favorite pass-time of 18th Century nobility: the hunt! A wild boar (left) and a stag (right) were very popular game.