There’s something about Queens of England and amethysts that don’t mix. An excellent example being the amethyst parure that belonged to Queen Mary of Teck, the queen of jewellery herself. She won the aubergine stones at a charity auction and had them made into this five-piece parure.

We all know Mary of Teck just layered on her jewellery but I guess she finally decided she had too many gems or the color purple did nothing for her complexion. She wore the parure only once, I guess for the above-right photo, and then she gave the set to the Queen Mum. 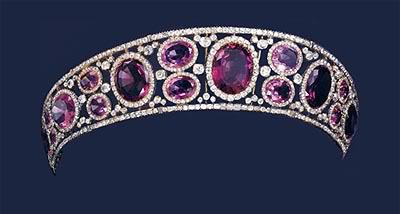 The Queen Mum must have had a similar distaste for the stone because she never once donned her mother-in-law’s amethyst parure. She offered the matched set of amethysts to her daughter but Elizabeth II deemed it unfit for the royal collection. Instead it was auctioned off.

See how little esteem there can be for a tiara? Doesn’t it just break your heart? We don’t know the year the stones were purchased, what jeweler set them or when it was auctioned a second time. (If it’s recorded, the info isn’t as readily available as with other head-toppers of the British Royal Collection.) We do know that parts of the parure have been sported by American Vogue editor and fashion icon Anna Wintour.

Alas, living and working in America provide little possibility of attending a tiara event. Ms. Wintour (left) is British-born and–interesting factoid–a descendant of Lady Elizabeth Foster, the second wife of the 5th Duke of Devonshire. (The duke’s first wife was Lady Georgiana Spencer. Maybe you’d remember the Duchess of Devonshire as the title character of that awful Keira Knightly bio-pic, The Duchess. God help me, it was unwatchable. I tried four times to get through it and I just couldn’t pay attention pay attention.)

Of course none of this really adds up to Wintour being able to find a place where she might wear a tiara. I’m just a sucker for random trivia. It makes for fun party conversation and seemingly random strangers with whom you must mingle give you the strangest looks. Why the heck would she know that? You can’t put that on a résumé… Very true but isn’t that what blogs are for?