Good news, jewellery buffs! You’ve been waiting patiently since April 16th for a new Tiara Time and now We reward your patience! Today’s tiara, much like that last post about the “Other” Steel-Cut Tiara, doesn’t have much background info nor does it have a formal name. As this beauty originated in Prussia, then was brought to Hanover but has only been pictured on a Grecian princess and a Romanov archduchess, your Blog Hostess felt it proper to name it in the most generic of terms. The Emerald Laurel Wreath Tiara. 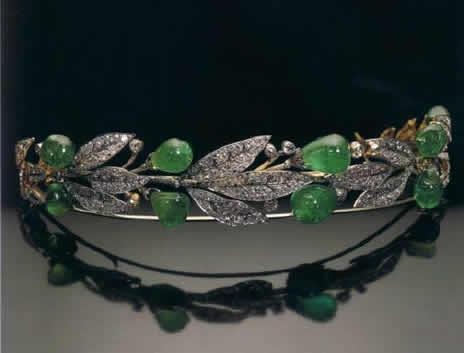 judging from the mirror reflection below, this photo is most likely a promotional auction photo. nice detail!

Funny, it’s kind of like jewellery’s salute to the chaplet. We have no exact dates and can only speculate on the manufacturer of the  Emerald Laurel Wreath. It’s believed to have been made at the turn of the 20th century in Russia–maybe Prussia, some say. Kaiser Wilhelm II gave it to his wife, Augusta Viktoria in 1905 in honor of their Silver (25th) Wedding Anniversary. It was passed down to their only daughter, Princess Viktoria Luise of Prussia and Germany. Princess Viktoria Luise sort of “married down” upon her 1913 wedding to Ernest Augustus, the Duke of Brunswick and Lüneburg, later the head of the house of Hanover.

Although We know the Emerald Laurel Wreath Tiara can also be worn as a necklace, it is not known how flexible the setting is. (It looks pretty rigid.) Nor do We do not know if the base was reset. Your Blog Hostess has affixed a studious gaze to the tiara perched atop the Empress’ huge coif and can neither confirm or deny if it is the Emerald wreath. Is it rampant speculation to say the Emerald Laurel Wreath Tiara wasn’t a favorite of either Empress Augusta or Princess Viktoria because there are no photos or portraits of mother nor daughter wearing it? I guess if you’re the Empress of Prussia and Germany it may seem a bit petite, but isn’t that where the charm lies?

Which brings us to this delightfully candid photo taken at a formal, yet unidentified event. We adore this photo so much We simply had to blog about this nebulous tiara. (They only thing We know for certain about said event is that it occurred after 1946!) Here we catch a glimpse of a conversation between two of Viktoria Luise’s children and Princess Sophia of Greece. What could Frederika–already the Queen of the Hellenes as denoted by the hefty bling–and her brother George Wilhelm be discussing with prince’s new wife? There’s certainly no speculation that Sophia has been loaned the Emerald Laurel Wreath by her mother-in-law Viktoria-Luise. (Don’t you just wish all mother-in-laws gifted and loaned tiaras? No such luck for your Blog Hostess!)

In a fur? Wasn’t the wedding May?

In this instance the tiara was clearly a loaner not a gift as the family auctioned off the Emerald Laurel Wreath after Viktoria-Luise’s passing in 1980. (Clue #2 that it wasn’t a family favorite, no matter how many times it was passed down. Such ennui they suffer!) It was auctioned off sometime in the 1990s and was either purchased by the Hapsburgs or Baron v.Thyssen-Bornemisza for his daughter, Francesca. Here we see the Archduchess Francesca below at the Crown Prince of Denmark’s wedding in 2004. We think it was a great choice for Francesca, look how it pops against her lovely red curls. The earrings she chose were the perfect degree of subtle to show off the Emerald Laurel Wreath. Finally this delightful tiara gets its due! Nice work Francesca! Here We’ve found some more “memories frozen in time” taken at the 2008 Philharmoniker Ball in Vienna. Here you get to see the Emerald Laurel in necklace form.

Heck, the Archduchess isn’t just wearing a royal heirloom, she’s having the time of her life. Check out the “many looks of Francesca!” Not only can she do “tipsy”…and We say that with the utmost respect! We fair-skinned people all have that blush (right-hand pic) after a few drinks. Nice to know your Blog Hostess is in regal company. The Archduchess can also do “runway sultry” (right) and she isn’t shy about letting her hair down (literally) and allowing her friends to play with her family heirloom. (Pictured below with philanthropist Gery Keszler.) 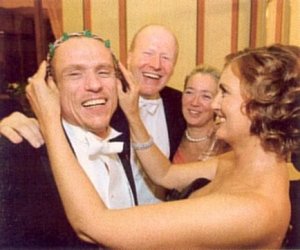 And finally Our favorite, the Archduchess “photo-bombing” in attempt to snap a shot of Bob Geldorf. (A photo-bomb within a photo-bomb…love it!)

Is she not somebody with whom you would love to attend a formal affair? Even have a drink with? Archduchess Francesca, you are invited to Our next Marie Antoinette Birthday Party. And–please!–bring the tiara, we’d all love to try it on!