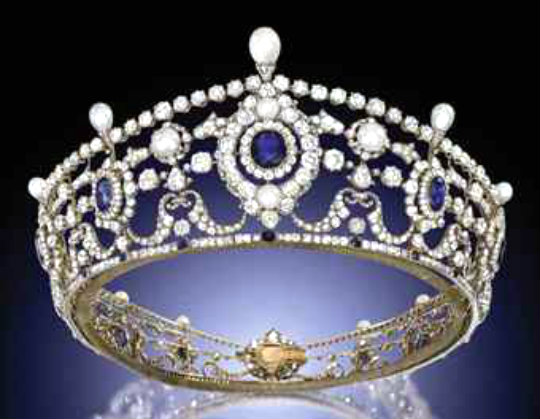 Well, We can’t write about one Portland tiara without addressing the other. That would be irresponsible! It seemed odd to call today’s gemstone halo the “Sapphire Portland Tiara” because We rarely see it written that way. So we’re going with plain ol’ Portland tiara. This jewel-ridden tiara was  made by E. Wolff & Co. for Garrard shortly after the 6th Duke’s marriage in 1889. Unfortunately, no image exists of Duchess Winifred sporting this Portland tiara, but the painted miniature below depicts Ivy, wife of the 7th Duke of Portland wearing the fixed-width diadem. 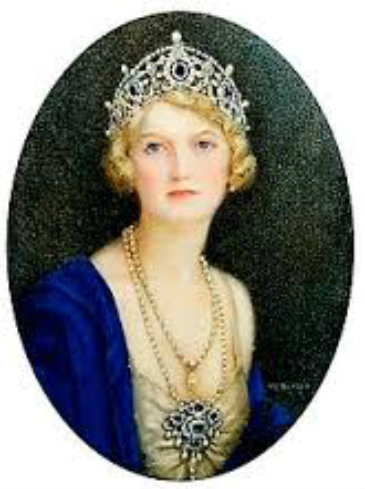 It’s a miniature of Duchess Ivy painted on ivory. Say that 5 times fast.

Best. Duchess. Name. Ever. This was painted when Ivy was Marchioness of Titchfield, so she must have borrowed the tiara and matching stomacher from Winifred, her mother-in-law. Interestingly enough, 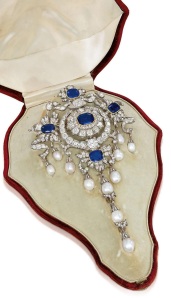 the Portland Tiara is a fixed-width tiara (think the George IV Diadem). It’s inner circumference is 54 cm or 21.26 inches for those of us on the left side of the Pond.

Yes, I’m getting out my sewing box and finding my tape-measure. Just a minute… (You’re more than welcome to measure your head while you wait.) Well, it appears the Portland tiara would fit like a glove. My noggin came in at 21 inches and change. It would be a close one. But enough about me.

The Portland Tiara main feature is the graduated series of cushion-cut sapphires clustered by old-cut diamonds.

These focal points are  topped with pear-shaped pearl finials. The open frame is made of both silver and gold, shaped with a motif of swags and husks–diamond swags and husks, mind you–in fact the entire thing is just crammed with diamonds when there isn’t a sapphire or bouton-shaped pearl to break up the monotony of all those diamonds. 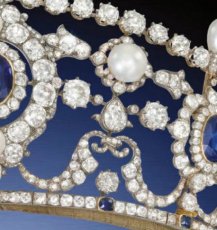 *yawn. let’s pretend we’re jaded and diamonds are a major source of ennuí. yeah right…*  As if this weren’t enough bling, E. Wolfe threw in sapphire collets to tie the whole thing together. Here’s another close up so now you know what a swag-and-husk motif looks like. Impress your friends. 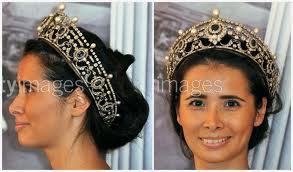 Before auctioning off, the Swiss Gemological Institute tested the gems and found 5 of the large sapphires to be Ceylon and 4 to be Burma: the Cadillacs of sapphires! The origin of remaining three is undetermined. All of the pearls are natural saltwater. The discrepancy between the sapphire origins makes perfect sense as it has been well-documented that a large amount of the family’s jewellery was dismantled to make the Portland Tiara. The sapphires obviously came from at least 3 different pieces that were sacrificed for parts.

Just like the Cartier Portland tiara from Tuesday, this one passed down to Lady Anne Cavendish and then her nephew William Parente, who put it up for auction along with a trove of family jewels in 2010.  Huh. At least the last three tiaras We’ve discussed have been lost to auction in addition to belonging to non-royals. We’ll try to break that streak.

(My husband wants to know why the tape measure is out.)