Trivia Toinette #14: Marie Thérèse had 5 Different Titles in her Life.

And I mean changes in status, rank. I’m not talking about extra honorifics like Prince of Wales, Earl of Chester, Duke of Rothesay and Duke of Cornwall or that list the Duchess of Alba’s got going on. My tax-return is shorter! I’m speaking in terms of deposed royalty, revolutionary upheaval, marriage, the Bourbon Restoration and–of course–the 20-Minute Reign. 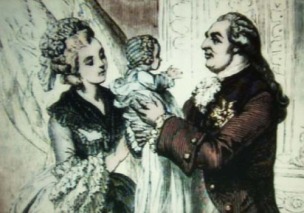 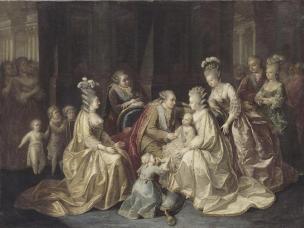 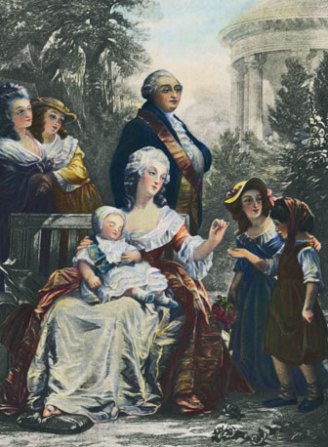 a royal family portrait in the Gardens at Petit Trianon

the famous painting by Wertm

Marie Térèse may hold some sort of bronze medal for circumstantial changes of title. Born Marie Thérèse of France, Madame Royal, eldest child of the King of France to–what would her ‘demotion’ have been while imprisioned?–Orphan Capet? Then again, that would only apply after the death of the Widow Capet.–ahem.

Imprisoned in the Temple 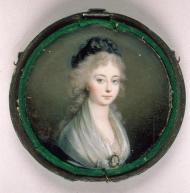 recaptured in Vareness after fleeing the Tuileries on June 20,1791

Revolution and imprisonment aside, to the exiled royals and royalists everywhere, Marie Thérèse continued to be Madame Royale. In 1799, she married her cousin, Louis Antoine, her uncle’s first son Louis XVI’s youngest brother, the Compte d’Artois. (I just love first cousin marriages, don’t you?) Once the only daughter of Marie Antoinette married, Marie Thérèse of France was known as the Duchesse d’Angoulême, per her husband, Cousin Louis Antoine’s title. (I’m sorry. I’m not picking on royals for marrying their cousins. I know it was common practice. For some reason, I find incest hilarious and sort of fascinating.)

In 1824, the death of Provance brought the ascension of Artoise as King Charles X.“Mousseline” was automatically upgraded to Madame la Dauphine, the same title her maman held upon her arrival in France 1770. Paired with the thrill of ending up just like your mother–definitively!–came the return of her “of France” moniker. (Like she’d just lost it under the bed for the past 45 years.)

By now most of us know this part of the story: on August 2, 1830 King Charles X was forced to abdicate. Louis Antoine and Marie Thérèse ruled as king and queen for 20 minutes. (You know how government paperwork is.) The Tale of the 20 Minutes is related as such: the new King Louis XIX spent his reign listening to the Queen of France implore, insist, and finally drill him not to sign. Charles X (the King Dowager?) supposedly wept with his head in his hands. The duc/dauphin/king did sign but to the rest of the Bourbon-supporters, he continued to be Louis Antoine of France until Artois died, upon which time he was/still is the Louis XIX and Mousseline was queen. The king died before his wife, handing Marie Térèse one last honorific shift. Dowager Queen of France is etched on her tombstone.

Perhaps the most interesting name Marie Thérèse of France was an observation of Napoleon. During the One Hundred Days, Napoleon’s militant return to France, Marie Thérèse happened to be visiting Bordeaux at the time with her husband the Duc d’Angoulmêne. While Louis XVIII and the dauphin Artois fled the country, her husband the Duc departed to join the French battalions. Although her uncle the king told Marie Thérèse to flee as he did, the Duchesse remained in Pauillac to rally the troops against Napoleon’s advancing armies. The French troops agreed to defend the duchess as long as it did not provoke a civil war with Napoleon. His soldiers were ordered to arrest the Duchesse d’Angoulmêne upon their in Bordeaux. Fearing her cause was lost, the former Madame Royale left, hoping to spare the city needless destruction. Her actions caused Napoleon to call Marie Térèse, “the only man in her family.”

10 Responses to Trivia Toinette #14: Marie Thérèse had 5 Different Titles in her Life.