29 May 1825: the coronation of Charles X (aka Compte d’Artois, Louis XVI’s youngest brother) proved to be the most memorable moment of his reign. It had been fifty years since the last coronation, that of Charles’ eldest brother, Louis XVI.  In betwixt the coronation of the dauphin Louis-Auguste and the Compte d’Artois hovered five egregious decades, highlighted by a bloody revolution and Napoleon Bonaparte running amok and inciting another war that included most of Europe.

Why is this Tiara Time beginning with talk of King Charles X? Any wedding, coronation, or upgrade in noble status mandates a new set of over-the-top jewellery.  As the new Dauphine of France, Marie Thérèse naturally required something new and superfluously sparkling to wear to the coronation rites of Uncle Father-in-Law. (Yes, that’s his new nickname, deal with it.)

A staggering ruby parure owned by Empress Marie-Louise was dismantled to make a new ruby parure for the event. Marie Thérèse’s Ruby and Diamond Parure isn’t a short story. The same jewels have seen more incarnations than a Buddhist monk.

replica of the Ninot diadem

Napoleon was a real wife-pleaser, vehemently lavishing an avalanche of gemstones upon his lady-loves. In the autumn of 1810 an order was placed with the emperor’s favorite jeweler, François-Regnault Nitot, in honor of his new wife, Archduchess Marie-Louise of Habsburg, the daughter of Emperor Franz I of Austria and niece of Marie-Antoinette.

portrait by Jean Baptise Isabey. Marie Louise is wearing the necklace, from which is suspended a medallion with a portrait of Napoleon surrounded by diamonds. The medallion was also made by Ninot.

During the autumn of 1810, Ninot, began crafting two new parures, one of turquoise and diamonds, the other of rubies and diamonds.  The finished pieces were delivered to the emperor on January 16, 1811.

replica of the Ninot coronet

The Nitot Ruby and Diamond parure was a glistening eight-piece set. The suite included (1) a coronet, (2) a diadem, (3) a comb, (4) earrings, (5) a necklace, (6 &7) a pair of bracelets and (8) a belt! (And I thought the hair-pins in the Leuchtenberg Sapphire parure were unique!) Sketches of how the parure appeared in 1811 still exist; the original necklace has a much more intricate design than the one that survives today.

the Bapst & son versions of the parure

When Napoleon was finally ousted and the Bourbon monarchy restored with Louis XVIII as king. (We know Louis XVIII better as the Compte de Provance, middle child between Louis XVI and Compte d’Artois.) Since Louis XVIII was a widower, all “first lady” status and duties were conferred upon his niece, Marie Thérèse, then the duchesse d’Angoulême.

(She married Louis Antoine, the son of her uncle the compte d’Artois. Louis Antoine was not only the duc d’Angoulême but both Marie Thérèse’s husband and cousin. I’ve constantly wondered whose idea that was. (First cousins are a genetic nightmare; second cousins–interestingly enough–are far enough apart genetically to safely procreate. Do not ask why I know that.)

Marie Térèse enjoyed the splendor of the crown jewel collection exclusively. She wore the Ninot Ruby and Diamond parure in its original form before she had it remodeled in 1816 by Bapst and P.F. Ménière .

In 1825, Bapst, then the crown jeweler, modified the ruby-and-diamond suite yet again in preparation for the coronation at Rheims. Several more rubies were added to the suite, ‘several’ being an understatement. By the end of Charles X’s reign, the parure consisted of 26 pieces: (1) a diadem, (2) a coronet, (3) a belt, (4 &5) a pair of bracelets, (6) earrings, (7) a pendant, (8) a rosette-shaped fastener, (9) a small necklace, (10) a large necklace, (11-24) a set of 14 corsage studs and finally two unspecified “accessories” (25 & 26.) I wonder if you could wear the corsage studs as hair-pins. Anyone see a thematic obsession here?

P.F. Ménière used the designs of his son-in-law Evrard Bapst. The Bapst-Ménière Duo were the same craftsmen who created Marie Térèse’s Emerald and Diamond diadem. Both the Emerald and Ruby diadems mirror each other in the Bapst signature style. Use of clusters of colored stones edged with diamonds and more diamonds to create the neo-classical acanthus scrolls & the gently undulating band of stones that supports the orientation of the whole design. There is little doubt that the two tiaras are clearly the work of the same artist. Although they were not commissioned as such, the Ruby and Emerald diadems seem like a pair, complimenting each other like salt and pepper shakers.

return of the bonapartes; more parures for Eugenie

Napoleon III became emperor in 1852. His wife, Empress Eugenie, was the next royal to wear the ruby and diamond jewels. This time, the parure was left intact as it was considered to be of the finest craftsmanship and in no way outmoded. However, many of the other jewels in the collection were dismantled and remodeled to reflect the fashion of the time.

the french government auctions off the crown jewels

In 1887, the French government auctioned the crown jewels. The historic collection had seven–yes, seven–parures but each set was split up allowing each item to be auctioned individually. Not unlike selling a used car for parts, several of the more extravagant pieces were dismantled, the larger diamonds sold off one by one. *Sniff, sniff* Sad to see a work of art dismantled, even sorrier that none of those loose stones are mine!

the Ruby and Diamond Parure prior to auction

auction catalog listed a rosary among the items from the duchesse d’Angoulême’s suite. The missing prayer beads baffles most, as there exists no photograph of a ruby rosary.  However the original parure roster of 26 pieces (see above) lists those two unnamed accessories. One of the accoutrements was probably the rosary; the cataloguer perhaps wasn’t Catholic and bewildered as to what the string of jewels could be. (This, of course is a Blog Hostess “theory,” of which I have many, some far more outlandish.) 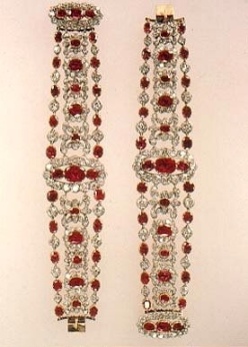 Bapst and Son, the same company that had done the remodeling in 1816 and 1825, acquired the large ruby-and-diamond necklace. The necklace vanished, finally resurfacing at Christie’s Geneva auctions. At the necklace’s first visit to the block in 1982 it sold for $458,000. The second time around in 1993, the necklace sold for almost $1.3 million. (I’m not a banker but that sure sounds like a good return on an investment.)

The Ruby and Diamond diadem went to a fellow named Mr. Hass. The matching bracelets were sold to Tiffany & Co.  Within a year, these jewels were resold to Mr. Bradley-Martin, an original member of the “Four Hundred,” a term coined for New York City’s high society.

Several pieces of the suite are believed to be circulating out there; their journey is rife with anecdotes. Since this post is already a bit lengthy, we’ll dedicate a part two to the duchesse d’Angoulême’s Ruby and Diamond Parure.