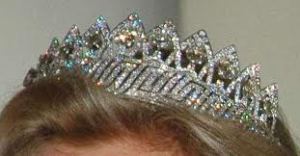 Back to Belgium we go for today’s edition of Tiara Time. This wedding tiara goes by two names; the geographically-informative Nine Provinces tiara or mildly-anachronistic Belgian Empire tiara. We like the Belgian Empire tiara, personally. It has a more poetic flair, nostalgic and misleading. Guess it could be easily confused with the Luxembourg Empire tiara. Call it what you like.

The Belgian Empire tiara was a gift to Princess Astrid of Sweden in honor of her marriage to Crown Prince Leopold. This diamond bandeau was a gift from the Belgian people. Read: public taxes paid for a ton of diamonds to give to an incoming (foreign!) princess.

Created by Belgian jeweler Van Bever, the original version of the Nine Provinces tiara was a flexible meander bandeau in a stylized Greek key motif topped with 11 large diamonds on spikes. (In 1926, the meander/Greek key look was all the rage.) The 11 diamonds have a total carat-weight well over 100 and are removable. You know, in case you’ll be wearing your tiara in a bad neighborhood. Yeah. It’s best not to chance it.

Literally not adding up, why does the Nine Provinces have eleven spike-mounted diamonds? The nine provinces part is easy: Belgium is made up of nine provinces. I’m astounded too.  Back when the tiara was made, the Congo was also a Belgian province, so there’s ten. It’s the eleventh that is up for serious debate. Some say 11th represents the unity of the provinces or representing Belgium herself. Some say the eleventh diamond represents the royal family. Either way, the Belgian Empire tiara makes more sense mathematically and Nine Provinces more politically correct?

A few years later, Princess Astrid added diamond arches to enclose the eleven “province” diamonds.  The design allowed for the arches to detach and just the bandeau to be worn. In 1934 Leopold was crowned and Astrid became queen. Poor Queen Astrid died in a car accident at the age of 29. She had been queen for less than a year, when driving along the twisty roads in Küssnacht am Rigi, Schwyz, King Leopold lost control of the car, plunging into Lake Lucerne, killing Queen Astrid.

King Leopold remarried a commoner Lilian Baels in 1941. The couple married in secret and there was significant public chafing. Lilian was not approved of thus the king’s image suffered. Leopold dubbed her Princess de Réthy.  Symbolically, forever Princess Lillian–she was never named queen, the public wouldn’t stand for it–only wore parts of the Belgian Empire tiara but never the whole structure. It’s like being given a Mr. Potato-Head but never having all the eyes, lips and hair together at once. (Our similes are a bit loopy today.)

In 1960, Baudoin married Doña Fabiola de Mora y Aragón. The diadem was handed directly to Princess Fabiola from King Leopold. Thus establishing the tradition that the Belgian Empire tiara was property of the Queen of Belgium, handed from one queen to the next. (Sorry ‘Lil. Not all of us second-queen consorts get the golden Camilla treatment; some of us get snubbed.) The Nine Provinces was Princess Fabiola’s wedding tiara.

In keeping with strict tradition, Fabiola gave the diadem to Paola when Baudoin died in 1993.  When King Albert and Queen Paola ‘retired’ earlier this year, the tiara migrated on to the new queen. Queen Mathilde wore the bandeau solo for her first formal gala as queen consort to King Phillipe.

Just like Fabiola’s Spanish Wedding Gift tiara, the Belgian Empire is an incredibly functional tiara, offering 7 different variations. Let’s run through them together, shall we?

Lillian, never allowed to wear the whole schmear, got even more resourceful. She’s used the detachable 11 diamonds to top the Queen Elizabeth Diamond Bandeau. On the left she wears the Nine Provinces as a bracelet. (She’s wearing the Queen Elizabeth Diamond bandeau as a necklace.) She also hung them like 11 pricey pony beads from a Van Cleef & Arpels necklace (above, right.) Mixing-and-matching doesn’t count toward an official option in my mind. Many tiara/gem wealthy types do it.