[the best of] Tiara Time: the Napoleonic Amethyst Parure

Technically, Amethysts Ahoy! was only supposed to be a theme week, not a theme fortnight. Yes, We admit to a few daily lapses due to…let’s call them circumstances beyond our con–hangovers. They were hangovers. Yes, We also admit We were holding out on you. Those first tiaras were merely to whet your amethyst appetite. And, yes, We intended to build up to something both historically and visually epic, so it seems a shame to quit now.

Part of the Bernadotte Foundation in Sweden, this tiara goes by a few monikers, ‘Queen Joséphine’s Amethyst tiara’ or the ‘Napoleonic Amethyst tiara.’ Your Blog Hostess prefers “the Napoleonic Amethysts;” I find them to be the most accurate name. Whether they were originally toys of Joséphine I or gifts she directly bestowed, the stones most certainly originated with the first Empress of the French. 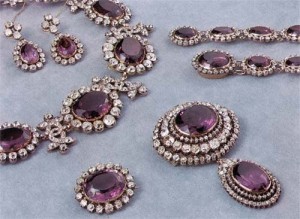 Around the Internet, there is some matter of debate as to whether the Napoleonic Amethysts were wedding gifts given directly to Joséphine II by her grandmother Joséphine I or whether Joséphine II’s mother, Princess Augusta of Bavaria, gave them to her daughter when she left Leuchtenberg to marry Oscar I King of Sweden and Norway. Naturally, there exists the third possibility that Josephine II inherited the plum parure when her mother died, as was the case with the Leuchtenberg Sapphire Parure.

Most historians seem to agree that  Joséphine II received both the Napoleonic Amethysts and the Cameo Tiara directly from her Empress grandmother when she set off for Stockholm. The amethysts made up a demi-parure, featuring a necklace, two bracelets, earrings and a brooch with a removable teardrop pendant.

The largest of the amethysts made up the grandiose necklace until Silvia married into the family in 1976. (Below L to R: Princess Désirée, Princess Christina and Princess Margaretha all in the Napoleonic Amethysts in original necklace format.) 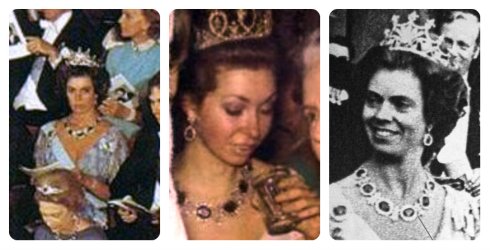 I wonder what’s in bottom of Princess Christina’s drink? It looks fascinating. 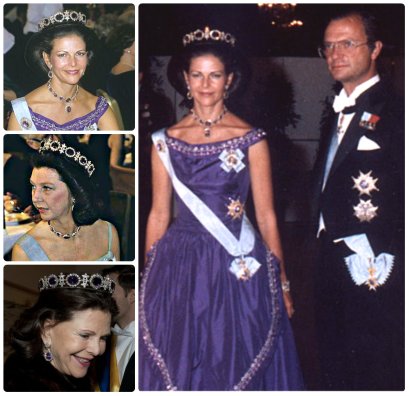 Perhaps the new Queen Silvia was thinking the same thing We are thinking now. “Who’s ever heard of a parure without a tiara?” Isn’t a parure sans-tiara simply matched jewelry? Either way, Silvia went on record describing the necklace as dreadfully heavy, a literal pain-in-the-neck. She had the 15 stones of the necklace converted into the tiara we know today.

Made of the fifteen grandest stones surrounded by diamonds in what’s been called both “French Empire” and “Regency” style, the oval stones are set sideways giving an “all-seeing eye” type feeling. One of the 15 stones is removable, to serve as a ‘back-up brooch’…or even maybe an hairpin! While the tiara certainly gets all the fanfare, the rest of the parure still exists. The two bracelets are often linked to form second necklace. Queen Silvia added the detachable teardrop from the brooch to this necklace at the 1986 Nobel Prizes. Her 1986 Nobel-regalia is actually a fabulous case study as she wore the entire parure that evening. She even used the back-up detachable amethyst to anchor her sash. Paired with a silk taffeta dress by Jørgen Bender, it leaves you wondering if the Dainish designer created the dress with the amethysts in mind. (Do check out the Nobel Prize webpage; it features an entire section dedicated to all the dresses Queen Silvia has worn to the awards since 1976. If you find this chain of all-seeing purple eyes disconcerting, rest assured that it can still be detached from its frame and worn as Joséphine II intended.

As the Napoleonic Amethysts are part of the Bernadotte foundation and not the personal property of just one royal Swede, we’ve seen the tiara on many of Sweden’s royal ladies. 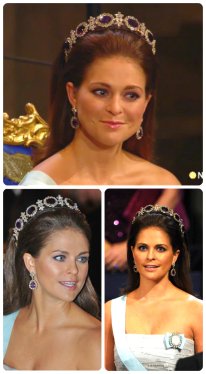 True we mainly see the tiara on Queen Silvia and Crown Princess Victoria but We even managed to find photographic proof that Princess Désirée wears that wreath of aubergine. (See above.)

After tiara event after tiara event, it appeared that Princess Madeleine might not care for the parure that Joséphine II brought in her wedding trousseau. This past Nobel Awards (2012) the princess appeared, looking fabulous, I might add.

Which placement do you  prefer? Princess Madeleine’s tiara-perch or her big sister Victoria’s halo-nest directly on top?

does it get your vote?

3 Responses to [the best of] Tiara Time: the Napoleonic Amethyst Parure