Remember when I said that there’s something about the Queens of England and amethysts? Queen Mary wore her parure once then gave it to the Queen Mum who didn’t want it. Nor did her daughter, Elizabeth II. This prompted Stonebiscuit to comment “What is wrong with those Queens?” amongst some other hilarious things in her reply to Monday’s post.

Queen Alexandra (the Queen-Consort of England who came before Mary of Teck) also had an amethyst tiara that wasn’t without its intrigue. These amethysts were also gifts from a Tsar: Alexander III, though these Siberian aubergines were completely free of amorous overtures. There’s nothing like a no-cords-attached, good ol’ fashioned over-privileged emperor to over-privileged monarch lavishing of jewels, now is there? (The real question is, “How do We get in on that action”? Yeah, you know what I mean…)

Let’s defer to the description in Christie’s auction page:

you get a better look at the scrollwork in this pic.

It wasn’t that Queen Alexandra disliked the tiara the way her successors Mary, Elizabeth & Elizabeth turned their noses up at the Mary of Teck’s Amethyst Parure. After Alix’s husband King Edward VII died in 1910, she became more and more solitary and quite uninterested in jeweled finery. (So sad to see a queen mother so blasé about gemstones!) The now-Dowager Queen was so disinterested that Alix died without a will. It’s generally believed her children divided her jewellery among themselves.

(What cannot be proven is whether the divvying up of Alix’s collection was amicable or elbows were thrown. I’m guessing the process wasn’t like an afternoon of backyard croquet but no black eyes were incurred either. But this is editorializing for humor.)

This amethyst tiara carried the moniker “mystery” for quite some time because, firstly, if someone was hitting the town in this the tiara, no one had seen it. Secondly, few people were aware that the Amethyst tiara had been passed down through the Fife line of the family. If you ask me, the real mystery is how all Alix’s tiaras managed to float atop that happenin’ Kid-n-Play flat-top hairdo she was always rockin’.

Queen Alexandra’s eldest daughter, Louise, Princess Royal and Duchess of Fife had taken the amethyst tiara as well as a sapphire necklace also gifted by Tsar Alexander III. Just like all great, lesser-known tiaras, There are 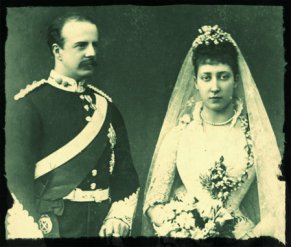 no pictures of the Duchess of Fife wearing it, so here’s a few of the Princess Royal, in case you, uh, ever have to pick her out of a crowd. Okay, a textbook…that’s far less of an anachronistic speculation.  To the left is the official portrait from her marriage Lord Alexander Duff, who was upgraded from Earl to Duke of Fife two days after the wedding. Doesn’t Alix look thrilled to be getting married? Yikes! 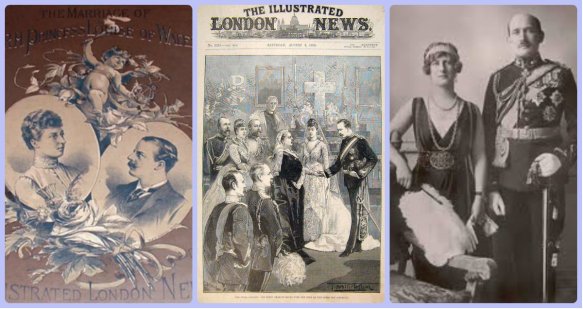 (left to right) A commemorative souvenir of the wedding; the London News headline: 27 July 1889 and another portrait where Alix doesn’t look quite so tortured.

Princess Louise finally passed the Alix’s Amethyst tiara down to her second daughter Maud of Fife, who became Countess of Southesk upon her marriage to Charles Carnegie, 11th Earl of Southesk (top left). Most other sources agree that Maud may have worn the tiara a few times before selling it at auction on June 26, 1946. (I came across the grainiest newspaper scan, but honestly, it could be anyone in any tiara. So, pass.) Instead, let us gaze upon some photos of Louise and her daughters (below) and remember that even a duchess dresses her kids funny sometimes.

In addition to the Mystery Amethyst Tiara, several other pieces of Alix’s jewellery were auctioned at Christie’s. The tiara fetched a mere £1750. Now, of course, there’s a new mystery surrounding Alix’s Amethyst tiara: who has it now?

Can you see our hat bows from space? …Good.