Posted on Tuesday, 11, November, 2014 9:10 am by ♔ la dauphiine ♔
We made it, tiara pilgrims! Sometimes they’re not all pretty, sometimes they’re not all your cup of tea but a theme week is always a learning experience. Fittingly, there were seven tiaras to round the week out to a T. (In case you weren’t around for Our original theme week, Attack of the Brooches, you weren’t here to find We only made it to six out of seven days. And believe you me Her Majesty QEII has far more than seven brooches!
Sunday: the last day of the Westminster Tiara Theme Week. Yes, ultimately there will be at least one bit of jewellery that one of us simply cannot live without…which one was yours? Wait! Form not an opinion yet! We’ve still got one more to go! Hang on tight, it’s the home stretch! Lean in! 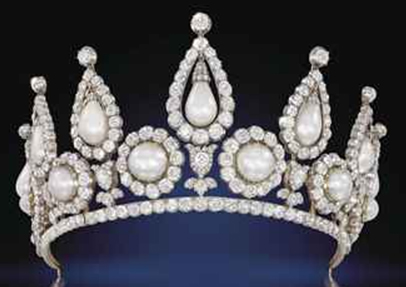 The Rosebery Tiara is filed under “gone but not forgotten” along with the Halo Tiara bought for (bitchy) Loelia. It was eventually sold at Christie’s in 2011 and is no longer with the collection. Keith Penton, Head of Jewels at Christie’s London called the Rosebery tiara, “a particularly potent symbol of the Rosebery’s wealth and status”.
This stalagmite tiara of diamonds and hyperbolic natural pearls once belonged to Hanna Primrose, the Countess of Rosebery: a Rothschild heiress.  (As far as I can tell, these “European Rothschilds” are of no relation to the New York Rothschilds who rigged the 1919 World Series. Then again, I only gave it a cursory glance. Wouldn’t that be neat? Old New York Mafia and European Peerage married together! Oh don’t make that face! They’d have a much better chance than the Hapsburgs and the Bourbons!)

preliminary sketches for the Rosebery tiara also explain how each detachable piece will be numbered, denoting the loop to where it should be replaced

Christie’s.com further describes the Rosebery tiara as “accompanied by seven pearl and diamond drops that can be attached to the band…or hung beneath each detachable circular cluster when they are worn as brooches”.  The New York Timeswaxed a bit more poetic on the Rosebery “tiara formed of a semi-circle of pearls as big as walnuts, contained about 150 diamonds of the first water. This gorgeous headdress is convertible into a necklace, to which may be fitted seven magnificent diamond pendants, each one centered with a pear-shaped pearl.” [When they say ‘the first water’ they mean naturally-occurring pearls, not farmed aka “cultured” pearls.] 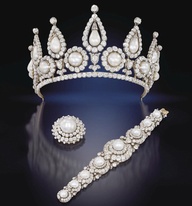 At first sight, I cannot decide what this stalagmite tiara of diamond and upside-down pearl drops reminds me of more. Most definitely those almond candies traditionally given out at Italian weddings come to mind. (Those candies are just so nasty. Take my word for it. Even if you’re plastered –which you’re certain to be after an Italian wedding– they’re still repugnant. So dry, so trapped in your throat! Why Grandma, why serve these?
Possibly they remind me of exclamation points. (Who shot Mr. Burns? The BABY!  Fetch me my Shocked & Surprised Tiara!)
It is likely the Rosebery jewels were acquired at the time of Hannah’s marriage to  Archibald Primrose, 5th Earl of Rosebery, on March 20 1878. Writing to a friend shortly before his wedding, Rosebery described Hannah as “very simple, very unspoilt, very clever, very warm-hearted and very shy…I never knew such a beautiful character”. The guest of honour was the Prince of Wales and the Prime Minister, Benjamin Disraeli, gave the bride away. Lady Hannah became Britain’s richest lady once her father, Mayer Amschel de Rothschild, died. Her husband, the Earl of Rosebery was one of Queen Victoria’s prime ministers, unfortunately the Countess did not live to see the honor.

After her death in November of 1890, the Rosebery tiara went to her son Harry Archibald Primrose’s fiancée as a wedding gift, Lord Dalmeny (future sixth Earl of Rosebury) married a Grosvenor lady: Dorothy Alice Margaret Augusta Grosvenor, daughter of Lord Henry George Grosvenor. The New York Times reported on the April 18, 1909 wedding and gave an even better description of the Rosebery Tiara:
“chief in importance was the collection of jewels that belonged to the late Lady Rosebery, which had lain unworn in their cases for nearly twenty years. Parures, tiaras, necklaces, bracelets, brooches, pendants, earrings and clasps composed of diamonds of great size and of pearls formed a collection of sufficient quantity and quality to make the coronation ornaments for a dozen Queens”.
The tiara was passed down through the family until 2011, when it was sold by Christie’s for £1,161,250 ($1,905,611) to an unidentified bidder. Similarly, the seller was also anonymous, though it was strongly suspected to have come from the Westminsters.
I found most pictures of this lovely pearl masterpiece attached to a picture of this girl (below). Somebody out there is apparently under the impression she’s the new owner, gift from daddy…whatever. Before you unleash every swear in the catalog, like I did… 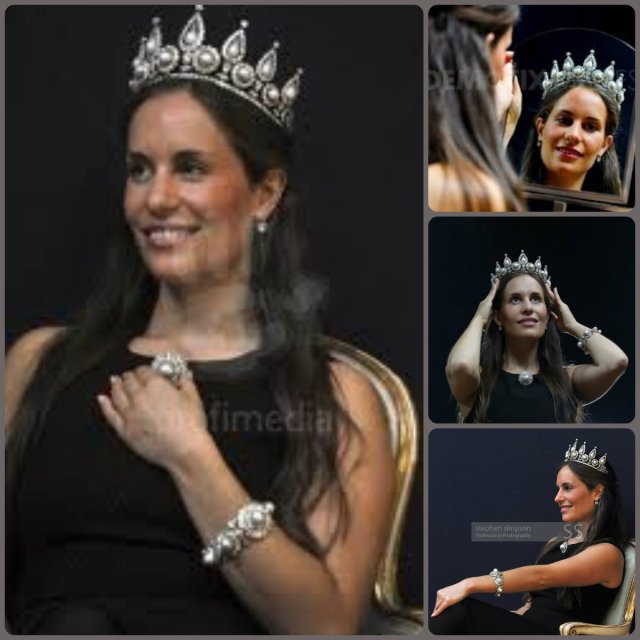 Though she struts, smirks and apparently even crowns herself like she’s Catherine the Great, Mary Queen of Scots and the Lucretia de Borgia all rolled into one, this chick is just an employee of Christie’s. God is she milks it and misleads! For people like that, I have just one message: news flash honey, you’re nothing to look at even with the tiara on. And yes, I intentionally used the pictures that highlight your rippling, lunch-lady arms. I notice you don’t have a wedding ring…oh…
SORRY! That was my PMS-y, New York-honed tongue lashing out. (Felt good though…) I’ll try to keep my snark to a monthly minimum, but gimmie a break in life Christie’s wench!
Doesn’t it just break your heart to hear of all those “parures, tiaras, necklaces, bracelets…which had lain unworn in their cases for nearly twenty years?”  Poor neglected babies! Jewellery is made to be worn! Especially a tiara…

Well, I suppose I should have ended Westminster Tiara Collection Theme Week on a bright/clever note about tiaras. Frankly, I’m a bit spent! I know you can all form your own opinions, isn’t it obvious from the red text that I can? However, now that I’ve done my homework, brace yourself for yours.  You’ll find out what it is soon enough.