While I was busy procrastinating the rest of this post, Princess Gabrielle, Countess of Carlades and Hereditary Prince Jacques, Marquis des Baux were born, two minutes apart from one another. Nice work, distraction-free writing. Fat load of good you are.

the diamond foam aigrette made in 2011 by Lorenz Bäumer

FINALLY! a tiara time that features an aigrette is the missing link between the ‘tiaras’ and the ‘Trianon’

the diamond foam aigrette has bling just don’t mash it into your scalp.

Though VanCleef & Arpels is the official jeweler to the house of Grimaldi, when the royal engagement was announced Prince Albert and his South African Olympic swimmer fiancée decreed a Hunger Games between all of the jewelers on the legendaria Plâce de Vendrôme. [think 5th Avenue, Calle Serrano.] And watch us continue to mix languages like a tongue-hungry Cuisinart…

Lorenz Bäumer was educated as an engineer yet ended up designing costume jewelry instead of Boeing aircraft. Customers began making special orders for pieces made of gold and precious stones. The requests increased, Lorenz struck out on his own with a minor shop before going to the Show: a storefront on la Vendôme with the likes of Cartier, VanCleef & Arpels and Chamuet.

Each jewel house was told to submit 3 designs. Bäumer’s designs won out for Albert’s wedding gift to Charlene. You have to feel elated for him. You don’t need to speak French to see how ebullient Lorenz Bäumer gets when he talks diamonds.

Charlene was quite hands-on for the design process, making many of the tweaks herself. Lorenz Bäumer met with the future Serene Highness in her home. She was dressed in sweats. Our girl Charo is a casual gal, you can see it reflected in the aigrette she selected as formal wear.

Princess Charlene’s custom-made baubles are aquatically-themed and as a Pisces that’s fine with your Blog Hostess. We realize that the design is specifically evoking waves and if the name is any hint, the diamonds represent the foam, small when the wave first pulses up then large and dramatic at the apex, just before smashing against the sand. It’s dramatic, modern, creative, poetic then there are three things: 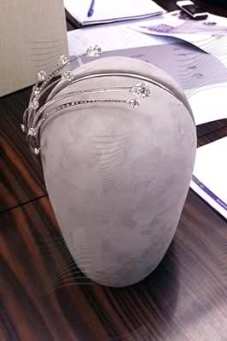 It sounds like we mock, yet your Blog Hostess has all the adoration in the world for this aigrette for the craftsmanship used to create the sea. 60 carats of diamonds set in white gold; those antennae may look delicate but remember the largest diamonds are on the ends. They’re still able to hold an 8 carat diamond, the largest of the 60, afloat like foam on the crest of a wave. To create the effect of the sea under the moonlight, Bäumer set different cuts of diamonds at the ends of those fine wires creating unexpected plays of light. Baguette, pear and round cut are set en tremblant, reflections in constant motion like the sea. Ideally, when Charlene moves her head, you’ll see that dazzling resplandor, like when Crown Princess Victoria wears the Steel-Cut Tiara or the Countess of Frederiksborg wears the Alexandrine Tiara.

So I was really annoyed to see how the new Princess of Monaco premiered it at the wedding evening gala. She bent the wires closer to her head; pretty much hid them in her hair. There would be no sparkle-fest. Why? Why would you just mash those lovely diamonds into your head like that? Now it’s more like a lice inspection than a tiara.

It has some shimmer, but the Diamond Foam is not living up to its potential. Grade: √-

The redeeming quality? The tiara’s a TRANSFORMER too! The Diamond Foam Aigrette comes with its own tiny screwdriver,  a C monogrammed in the handle. Now Charlene’s got options: a small brooch, a large brooch, and what is described as a “hairpiece.” I don’t get it. Is it a smaller aigrette? Technically, everything we feature on Tiara Time with the exception an occasional brooch or necklace is a hairpiece. Very often we’ve seen brooches and necklaces worn as hairpiece too. We’ll have to get back to you on that one. Photos are scarce.

What do you think? Too modern for your tastes or really cool?