if you don’t hear back from me in two weeks, just wait longer…

Yet another fact omnipotent Wikipedia missed in the ‘Palacio Riofrío’ entry. Carlos IV of Spain was an accomplished sausage-maker. 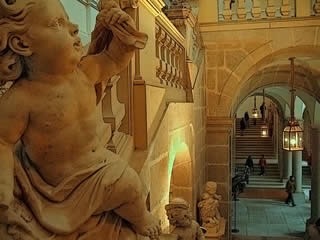 The King of Spain was prolific with his charcuterie output in this Royal residence near Segovia at the foot of la Sierra Madrileña. Interestingly, there exists not one photo of the smokehouse or killing floor that Carlos IV required to indulge his hobby. Face it, if it weren’t him, it’d be the staff doing the slaughtering. Spain adores its pork products. Your Blog Hostess wishes she were kidding.

Even the Petit Hameau had a slaughterhouse, everyone thought it was quaint. I guess Carlos IVs behavior was grudgingly tolerated as he was king. “Quaint” requires the irresistibility [and coin] of the French Bourbons.  Then again, the public despised M@ and much of the court scratched their heads at her “playing shepherdess” amusement park she’d built. So we guess they’re not that different.

Palacio Riofrío was built in the Italian baroque style by Virgilio Rabaglio from 1752-9.