As Emeralds in May winds to a close, but it wouldn’t be complete without a salute to Shabadu Farah, wife of the last Shah of Iran. In the parlance of our times, the Persian Empire has been stupid with priceless gems of legend for centuries, no shortage of May’s birthstone in those vaults.

Known as [Empress Farah’s] Seven Emerald Tiara, this beauty was commissioned in 1958 along with the Noor-ol-Ain tiara, before Farah was Empress or even Queen. Both tiaras, the wedding Noor-ol-Ain and the Seven Emerald tiara bear the similar a Harry Winston confection-flair of color. Come on, like it doesn’t remind you of candy? Mr. Winston is quickly becoming one of my favorite tiara-makers…he’s got a 20th Century flair while keeping it classy. No David’s Bridal tiaras here! Although the tiaras the Shah commissioned were intended for Farah, he was still married to his second wife, Queen Soraya, at the time. Tsk, tsk! The King & Queen of Iran divorced April of 1958 but the two Harry Winston tiaras remained locked in the vaults of the Bank Markazi behind bullet-proof glass vitrines until his marriage to Farah Diba on December 21, 1959. (Hey, why buy the steer if you get the bling for free?)

The seven epic emeralds are of either oval or round cabochon cut, the verdant gems range in graduated size from 10 to 65 carats. The diamonds that frame them are rumored

to be from South America.

Like its “sister tiara” also made by Harry Winston, the Seven Emerald is a delicious combination of several shades of diamonds, most of which came from the overwhelming Iranian collection of crown jewels. The base–hardly noticeable beneath all of those show-off stones above them–is heart-shaped platinum set with white baguette diamonds. Rising above the baguettes like Aurora herself are two rows of pink, yellow and white diamonds, most of which date back to the 19th Century and hail from India. Weighing in at 15 carats each, the two largest baubles’ combined weight is slightly heavier than Floyd Mayweather. 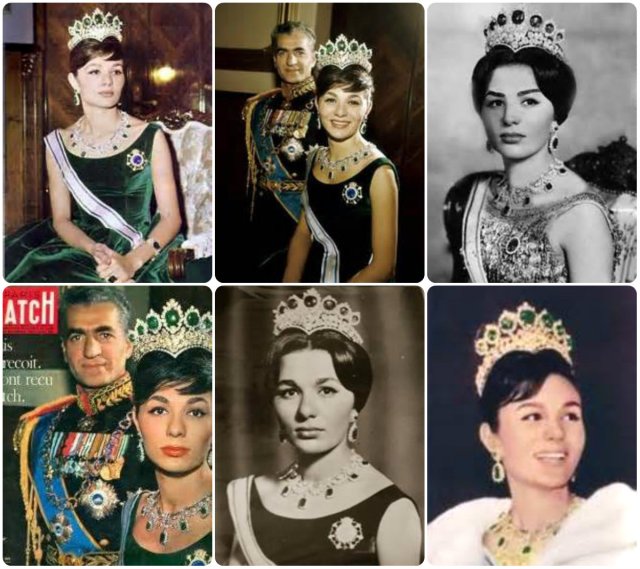 The Seven Emerald Tiara came to be Farah’s signature piece. (see above!) It must have something to do with the fact that the “widow’s peak” of the tiara complimented her up-dos. Perhaps it was the most comfortable, as seen here meeting up with the Kennedys during a State Visit in 1962.

Heyyy…did you see the way Johnny K checked Farah out? Watch again! He’s such a hound…