It’s Tiara Time on a Tuesday, how do you like that? Today’s Tiara Time Tiara Tuesday tiara goes by the street name “Queen Victoria’s Diamond and Emerald tiara” but we think Queen Victoria’s Emerald Tiara is sufficient. Those green gems dominate the work and so many tiaras have diamonds as filler for the frame. The diamonds are just “accent bling” and don’t really deserve a mention in the moniker, don’t you think?

Queen Victoria’s Emerald tiara is a rare, textbook example of a 19th Century Gothic revival tiara and was said to be Victoria’s favorite. Mounted in gold, the curved diamond structures and diamond-and-emerald spikes rising from the top of the tiara are a most glaring feature of Gothic-style jewelry. The cabochon emeralds in their upright exclamation-point fashion proclaimed upon the tall spires are accentuated with quatrefoil at the base, another very Gothic shape.

The circlet base of the tiara features two parallel bands of hundreds of tiny round-cut brilliants. The two bands are held together by short vertical ribs of two more round brilliants. The rectangular space between ribs is filled with a large rectangular-baguette emerald…rib-shaped emerald? We’re sorry! We just couldn’t come up with a better word than “rib!” I’ve already punished myself…your Blog Hostess is having visions of a big ol’ mess of baby-backs.

Like so many other baubles he gave his wife, the Emerald tiara was designed by Prince Albert  in 1845. It cost £1,150. Naturally, most of the work was done by Joseph Kitching. Kitching didn’t just make a tiara; it is one piece of a full emerald parure. However, the parure was already in the works before Albert dreamt up the tiara. 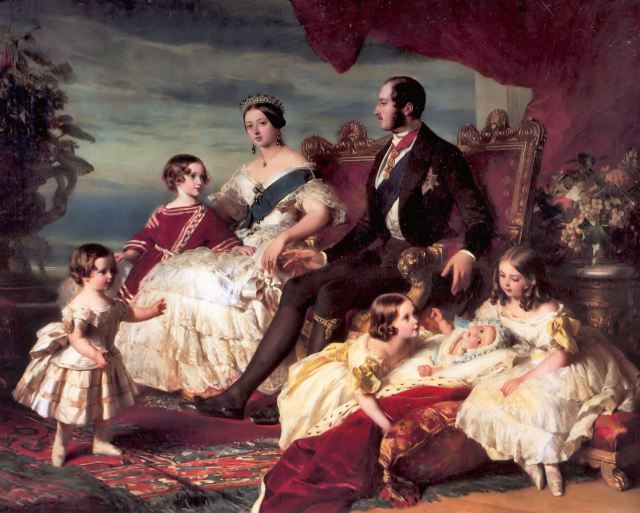 The Diamond and Emerald Tiara is perhaps the most famous of Queen Victoria’s jewelry since she wore it along with matching emeralds in Franz Xaver Winterhalter’s 1846 Neo-Rococo portrait fortuitously titled “The Royal Family.”

Interestingly, enough, the jewels she matched to the tiara for the portrait were not from the 1845 parure. Unless we’ve received bad information again, the parure emeralds are to the right.

Princess Victoria of Hesse and by Rhine

Unlike the many of her other tiaras which were crown property and therefore not loaned out, the Emerald Tiara remained with the Queen’s descendants but not of the main line.

She loaned the diadem to her granddaughter Princess Victoria of Hesse & by Rhine for an event held by the Duke of Albany in 1882. The princess wore the circlet the same way George IV sported the Diamond Diadem: to anchor a bag-like hat. This time the young princess was headed to a costume ball not a coronation. Your Blog Hostess agrees that neither seems like an appropriate use of glittering diadems.

For close to 100 years Queen Victoria’s favorite tiara was MIA until 1960 when it suddenly popped up on Lady Caroline Wosley’s melon. The 3rd Duchess of Fife wore it at the State Opening of Parliament. See below. We dig how she paired it with the dress.

For 450 bonus Tiara Points, can anyone tell me which tiara is circled at the bottom of the photo? Get an extra 50 if you tell us whose head it’s on. Oh, and you also get bragging rights.

Since then, it’s been a tiara phantom save a 1997 appearance at a tiara exhibition. Munn’s Tiaras: a History of Splendor reassures us that tiara survives “intact in the hands of a descendant of Queen Victoria.” Grievously, this statement could be malarkey.

It’s not irrational to suspect the Diamond and Emerald tiara continues in the possession of the descendants of the Fifes but  then it would most likely have been featured at the 2002 tiara exhibition at the Victoria and Albert Museum.

Just after the 1997 exhibition, rumors began to circulate that Queen Victoria’s Emerald tiara had been sold and “subsequently dismantled by its new owner.”

The dazzling display of 200 tiaras featured four diadems designed by Prince Albert for Victoria. Most notably, the Oriental Circlet and another circlet done in the Neo-Gothic style, the Diamond and Sapphire tiara. The Diamond and Emerald tiara was a no-show.  The lack of report or mention at the exposition seem to verify the tiara’s dismal dismantling. 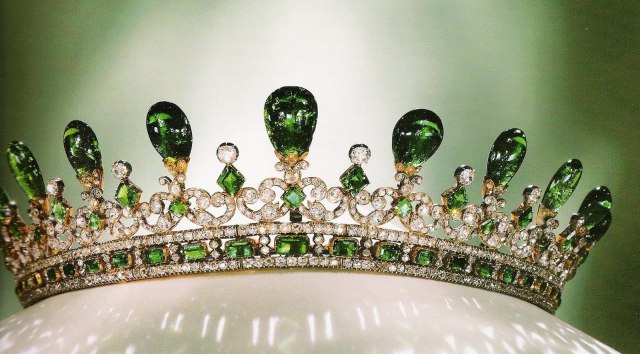 gone, but not forgotten