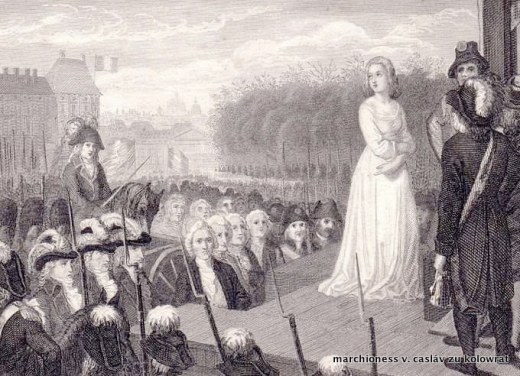 Two hundred and twenty-two years and roughly two hours ago, Marie Antoinette ascended the stairs to the guillotine in the newly-renamed Place de la Révolution, accidentally stepped on the executioner’s foot and begged his forgiveness.  We’ve discussed October 16, 1793 quite a few times over the tenure of this–whatever we’re claiming this desultory deluge is today. Whatever this is, half of the title is dedicated to the youngest child of the formidable Empress Maria Theresa.

How to commemorate an unjust execution each year? We’ve hashed out all the details. How the workers who left both body and head tossed on the grass next to the mass grave so they could have a long lunch, giving Madame Tussaud time to capture the tragic queen’s death mask in wax–and then reproduce her likeness all over the world. We’ve gone over the sham trial and her last letters written to her family.  Your Blog Hostess has even told the tale of the fresh, snow white dress Marie Antoinette produced from a crack in her cell wall at le Concierge just before she was escorted to her death. 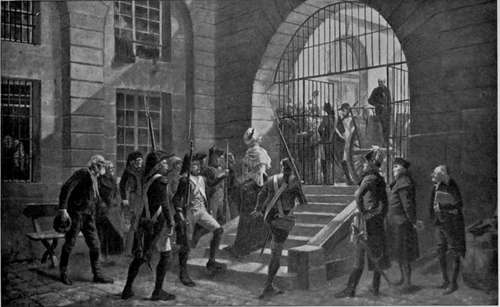 head held high on the way to the guillotine, the new ‘Widow Capet’ took it like a champ

One last new outfit. Who else could pull that off? [Yeah, not us.] More than anything, your Blog Hostess has commemorated Marie Antoine of Hapsburg-Lorraine by citing trivial factoids that We very well may have fabricated for our own amusement. Alas, fabricate we did not. The last Queen of France in fact did eat authentic Indian curry–albeit not much before the spices overwhelmed her. 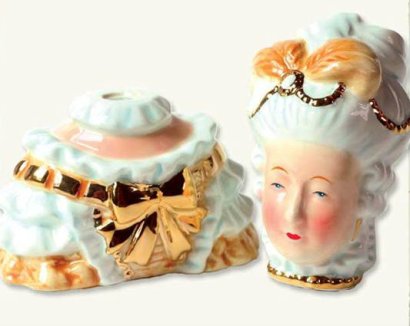 how many of you have been immortalized as both the salt and pepper shakers?

Marie Antoinette lives on as a huge pop culture icon today mainly because she has always fascinated.  Her colorful clothing was the inspiration for those chatoyant Ladurée macarons. Her shoes were auctioned off for a small fortune. ‘Toinette was the inspiration of at least two operas We can recall offhand. The Ghosts of Versailles, a Gran Opera Buffa that was commissioned to celebrate the Metropolitan Opera’s centennial. It opened about 10 years behind schedule and is one of the most costly productions. As a result the opera has only been performed in its entirety twice, at the Met and this past winter at the Los Angeles Opera. [Sooo worth it. Best birthday ever…] Antoinette and Fersen is a Swedish Folk opera We fully intend to download once We find an English translation to the libretto or attain fluency in Swedish…yeesh. Don’t hold your breath.

Even if you’re not the most famous decapitated queen in recorded history, as long as you’re Catholic and deceased a mass can always be held in your honor. Yesterday at 6:30 in the evening a mass was offered for Marie Antoinette at the Église Saint-Germain l’Auxerrois in Paris. [Louvre Metro stop if you’re feeling touristy.]

Amongst the worshipers were Henri d’Orleans, the Count of Paris and his second wife. [Above, duh.] Of the three pretenders to the throne of France, he represents the Orléanist branch. No word if the Count and Countess of Paris took the Metro. The royal chapel at Versailles would seem a more appropriate venue, right? [Why would you ever think your Blog Hostess would let you be right? Ha!]

Fittingly, the Église Saint-Germain l’Auxerrois was the court church back when the Louvre was still a royal residence. Though we all know Marie Antoinette never lived in that particular palace, the 13th Century church still has odd ties to the queen. The church’s magnificent organ was originally commissioned by Louis XVI for Sainte-Chapelle. [See right.] The mesmerizing carving in the pews are based off of 17th Century designs by Madame Vigée Le Brun, Antoinette’s portrait painter and close friend. [No photo, sorr’]

Memories both fond and legendary are often sparked from the tiniest of details. It’s pretty sweet to know we can all live forever. Should We end with a cheesy note? What the hell? Maybe you’ll remember it.