Hailing from the late 19th century, this Sotheby’s offering had “credit card warning” in flashing neon the second your Blog Hostess came across it. Offering no provenance or manufacturer’s name, Sotheby’s London had priced it between $9,000–$15,000 USD and your Blog Hostess knew she had that much room on a credit card–okay fine, spread over a few credit cards. The temptation was staggering. Not just to own a tiara, but one we wouldn’t be “settling for.”

Mounted in silver and backed in gold, this tiara boasts more cuts than the diamond district. Pear-shaped, oval, rose as well as circular and cushion-cut diamonds mingle together to create the motif of three roses and their greenery. Just like the other credit card alert lot, the Emerald and Diamond Kokoshnik, the Three Roses Tiara boasts our favorite circlet characteristic: en tremblant.

The central rose–and possibly the side ones too–is set on coiled springs allowing the diamonds to go all disco ball every time the wearer moves her head. The want of a video is yet another crime against the En Tremblant Community. (Namely us. We don’t hear anyone else kvetching about it…yet.)

Additionally, all three roses pop out to function as clips or brooches. On March 15, 2016, the Three Roses Tiara sold for $21,389; a tag that included the buyers’ premium.

For all the mystery surrounding the Three Roses Tiara’s craftsmanship and provenance, we do know one of the roses was worn as a brooch in British fashion designer Erdem Moralioglu’s SS16 show. Moralioglu’s dresses were inspired by the “prairie girls” of 1862.  “The delicacy of the tiara reflects the “wild” floral embroidery “littered across” his SS16 collection, both as beautiful in their delicacy,” expostulates the Sotheby’s website. 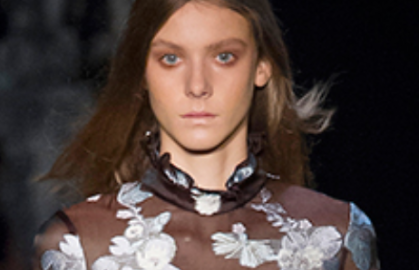 so on top of it all. It’s like Americans trying to do Cockney rhyming…no, sorry, it’s worse than that. And 1862 specifically? How au courant. Does anyone else here think fashions changed drastically in from 1862 to 1863 in pioneer America? Naturally the settlers in that expanse of amber waves were preoccupied with updating their calico, water source be damned. Come on, Erdem. Think less Sex and the City and more Laura Ingalls Wilder. Certainly, pioneer women were concerned with keeping their children alive and not dying in childbirth than whether their pattern of gingham was so last year.

Either way, the Three Roses Tiara will always feel like the tiara that got away, APR be damned.

The Three Roses gaveled at just over $15,000 USD and is currently for sale on 1stDibs.com.  Your Blog Hostess inquired about the fee and the vendor replied “$39,500 USD…including shipping and insurance.” What kind of a sap do they take us for? A consumer service, your Blog Hostess will not let you over-pay for your tiara!