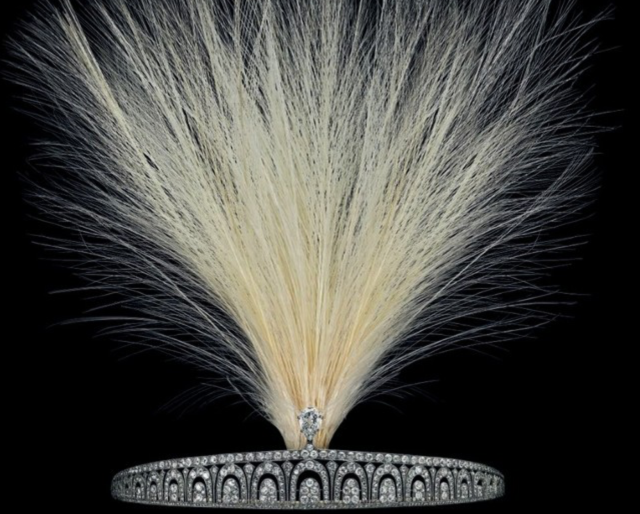 If your Blog Hostess hasn’t been all over the auctions like white on rice, well then nobody has…except the jewelry dealers. That’s their job. Yet another Christie’s offering up for bids in Geneva May 18th, we have this bad boy diamond bandeau tiara, whose only provenance is the nebulous description “Property of a Lady.” Gee, thanks for the back story, Christie’s.

Unlike the many of the other pieces to be sold in this Cartier auction, like the Oppenheimer Blue predicted to fetch $50 million or the pirate’s booty chest collection belonging to ex-Her Serene Highness Princess Gabriela zu Leiningen—this Art Déco circlet will not be on display in New York prior to next month’s hammer wars. [That’s what we’re calling them now. Don’t like it? Get your own hammer & meet us behind the school gym at 3:15…]

click to enlarge. All photo credit here and below: Christie’s

Described simply as “An Exquisite Art Déco Diamond tiara, by Cartier,” this diadem—plume optional—has a frame structured in platinum and gold, according to its French

Christie’s has set the gavel estimate based on what Queen Geraldine’s Diamond Tiara fetched not two weeks ago, somewhere between $200,000 and $300,000 USD. We understand that tiaras are growing far more scarce but this one does not even offer an official history, a glamorous owner can fetch those quarter-million dollar price-tags. But we’re comparing a queen to a vague lady from specifically nowhere.

But talk of money is so gauche. Let’s talk shiny rocks!
Sandwiched between two rows of old European and Rose-cut diamonds, a parade of arches, composed of more old-cut diamonds, taper off gently in size from the center outward. Making a statement in the center—again, feather optional—is an inverted 4.31 carat, pear-shaped diamond. Those upside-down pear-shaped diamonds will always look like explanation marks to us but do not be mislead by our overactive imagination. No, we would not turn our nose up at anything in the Art Déco tiara arena…ever.

At least this tiara doesn’t remind us of the classic Stone’s album “Goats’ Head Soup” when we contemplate it. And no, we wouldn’t turn Geraldine’s tiara down just because it features a noble mountain goat. 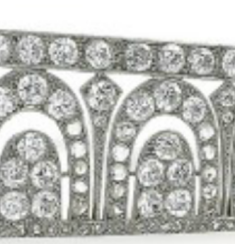 The tiara was made in 1920 and is signed “Cartier Londres Paris New York”, with a maker’s mark for Atelier Renault. We have Googled this and all that comes up is the Renault F1 webpage for the self-styled “bright space celebrating [the] car maker, with restaurant & events including televised Grand Prix races and race car-themed restaurant,” located on the Champs-Élysées. Oddly a venue that would appeal much more to my aerospace engineer brother than his jewel-monger sis.

It’s previous owner was labelled simply “a lady of title” but nothing else was divulged on the Christie’s website.